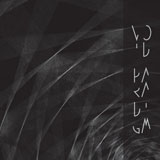 This release, the second black metal related album to emerge from the prolific Israeli label Totalrust, has been a bit of a difficult beast to pin down and thoroughly dissect. Following on from the very promising Geist release, Totalrust present Void Paradigm, a French trio who tout themselves as ‘Hypnotic Dodecatonic Black Metal’ (a nice mouthful for you there!). The initial premise is interesting, taking a bit more of an experimental and multi-faceted approach to the black metal formula; in reality however the album falls flat, with the hypnotic claim firmly out of the window due to the lack of coherency, combined with the tendency for tracks to wander off, losing focus and generally become very tedious indeed.

‘Chao Ab Chao’ introduces the album, combing intricate guitar work with interesting breakdowns that almost verge on post-rock/hardcore territory, the hallmark BM sounds are there, but there is something distinctly lacking. The aggression that they are trying so desperately to convey is just not happening, as far as production goes, everything just falls flat and sounds completely un-emotional as a result, which is a bit of shame really and this plagues the album massively. The problems encountered with ‘Chao Ab Chao’ continue throughout the whole record, the tracks seem to linger on for a lot longer than is absolutely necessary, ‘Fighting the Silence’ adds nothing new at all, whilst ‘Symmetrichaos’ incorporates (a lot!) of disparate, jazz influenced breakdowns, whilst again commendable, it just carries on ad infinitum, leaving you wondering as to what their overall aim is…it seems like an awful lot of posturing for no specific reason whatsoever. The last part of album meanders along, adding nothing more to engage the listener, the title track and ‘Building Cathedrals’ focus on more downbeat, melancholic atmospheres, which work to some degree, but again fail to really get you hooked and by the point the instrumental closer ‘Timeless Nothingness’ comes into play, you find yourself just wishing for the thing to end.

Ultimately this leads me back to the initial problem I had with reviewing this record, the ideas are fantastic, taking obvious cues from fellow countrymen Deathspell Omega and trying to incorporate post-rock influences into the standard BM practice…great, I am all for this, in principal, but unfortunately it feels like Void Paradigm are still trying to find their feet and develop their sound into something altogether more tangible. Given some time to hone their craft, Void Paradigm may become a bit more of an interesting proposition, which is a shame as I really do want to get on board with what they are trying to achieve, but as far as debuts go, this certainly does not make me eager to come rushing back for another helping of ‘Dodecatonic Black Metal’.