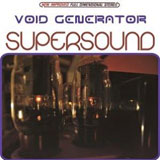 Void Generator is the sound of Italian doom stuck very rigidly in the hazy glow of the 60s. They’ve released ‘Supersound’, a gloriously analogue and saturated by fuzz rocking doom record.

Opening with the propulsive stomp of ‘Behind My Door’, Void Generator don’t pretend to be anything other than a dash of rock, a bigger dash of psych, and a liberal sledgehammering of heavy. There’s something delightfully Kyuss about the opening eight minutes, from layers of fuzz to the bluesy desert rock riffing. We move from that onto the catchy, bluesy ‘Synapsex’, a cracking RAWK tune for a sunny day on the road. It reminds me of a more restrained Monster Magnet; driving space rock lacking just that rockstar madness.

‘Masters Of The Skies’ is a titanic slab of psych rock, a hypnotising, rumbling beast with a great vocal performance. There’s something almost Jim Morrison about Gianmarco Iantaffi’s vocals on this track, and it adds a creepy vibe that is pretty cool. There’s smatterings of occult rock mixed within the stoner riffs, an uneasiness that permeates each song, each riff, each solo. It’s a unique mix to me; I’ve never come across anyone who can sound like Kyuss and The Devil’s Blood, but Void Generator come somewhere close. I like it.

The 60’s occult styling’s continue with the organ driven ‘What Are You Doin?’; A cover of McChurch Soundroom. Who? Yes, that’s what I said. Turns out they are a 60s/70s krautrock band from Switzerland. Yeah, I still don’t get it, but hey, ‘What Are You Doin?’ is a funky number that blends with the style and era that Void Generator are going for.

The album continues with the heaviest track here, ‘Hidden Orbit’, that is probably my favourite here. I think Void Generator work, for me, better mixing their obvious Monster Magnet influences with some Kyuss fuzz and some occult rock weirdness. ‘Hidden Orbit’ has got this righteous groove to it that I can’t help but promote. ‘Universal Winter’ is acoustic psychedelica, dropping the groove completely for a more mournful, desert ballad, before ‘Globular Cluster’ channels classic Monster Magnet for a satisfying close.

Overall, I think ‘Supersound’ is a good record. It has some great songs that stand out for me, mostly ‘Synapsex’ and ‘Hidden Orbit’. Void Generator have a good sound; they stand out a bit from the stoner and occult rock crowds by combining both into a heady mix. Seek out ‘Supersound’ if you can find it, you shouldn’t be disappointed.