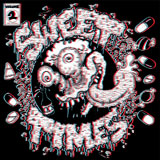 Growing up in the 80’s as a young metal head you would often find yourself drawn to the output of a particular label. Certain labels, such as Earache and Peaceville seemed to release albums of a consistent style and level that inspired a certain amount of brand loyalty. As the 90’s progressed, I found myself less and less interested in any particular label as nu-metal took hold and my early label loves grew bigger and keener to chase the trends. It does seem nowadays, however, that, possibly with the renewed interest in vinyl and the rise of underground, independent music, there are labels that are starting to inspire the same loyalty as their forebears. Small Stone and Rise Above would be prime examples of this within the doom and stoner genres and labels such as Ripple are fast coming through. I think the time has come to add Who Can You Trust? Records to that list. WCYT? have quietly yet tirelessly plugged away to produce quality, mostly vinyl releases that mine the finest seams of the garage and psyche rock underground with releases by the likes of Hot Lunch and Lecherous Gaze.

Here we have the second instalment in their ongoing Sweet Times series featuring a track apiece by four bands; The Golden Grass, Sultan Bathery, Metalleg and Gorilla. Now I must profess I know very little about most of these bands and the label’s website isn’t too forthcoming with info, so it is very much a case of letting the music do the talking. The Golden Grass kicks things off in splendid style with All You Have Grown. This is killer late 60’s acid rock with an added layer of fuzzed up heaviness. It has a vocal line to die for and hooks that bite so deep you’ll need pliers to rip them out. Add to that a suitably Hendrixian wah guitar freak out and you have the recipe for a whole heap of awesome.

Sultan Bathery are up next with the not at all appropriately titled 15 Minutes. This digs even deeper into 60’s style acid rock territory eschewing the heaviness of The Golden Grass for scathing fuzz tones and plenty of guitar jangle in a track that charges along, sounding for all the world as though it actually was recorded in a basement in 1967 in a haze of psychedelics. It certainly doesn’t last for 15 minutes!

Another band I am completely unfamiliar with, Metalleg are next with the very brief and punky Chained. Metalleg forego the garage rock style and steer closer to bands such as The Ramones and Supersuckers with an energetic blast of punk meets rock and roll.

Finally we have a UK band that may be a familiar name to many, the fantastic Gorilla. Front man Johnny Gorilla may be making more headlines these days with his proto metal outfit Admiral Sir Cloudesley Shovell but Gorilla, who have a slew of releases behind them, are still a going concern and it’s good to hear them back in action. Despite the strengths of the other tracks on this release, I have a huge soft spot for this band and their track Three Squealer stands out as an unqualified highlight as it rages from its muscular doomy intro, into a blasting rocker that hints at Motörhead as a prime influence and shows bassist Sarah Jane throwing caution to the wind with a heroic performance. Despite their recent lower profile, it’s clear that Gorilla are still capable of taking names and kicking arse in a belligerent and head strong fashion.

Who Can You Trust? Records is a label with an instinct for great, primal, filthy rock and roll and the Sweet Times series is a fantastic introduction into its grimy world. Check it out and explore the darkness further.