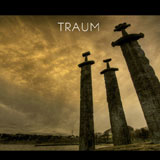 Instrumental metal is hard to pull off. In theory, a celebration of huge riffs and thundering drums unsullied by someone roaring over the top is a great thing. However, it can end up backfiring, being tedious, and having you longing for a vocalist to appear and steer things in the direction of an actual song.

Traum definitely have moments where you wish someone would come in and sing a chorus or verse here and there. For sure, this trio are accomplished musicians and successfully carry along a musical narrative that’s compelling enough on its’ own on more than one occasion on this album, but the problem here is one that many of their peers in the “post-metal” bracket face: they’re far too polite for their own good. As a result, sometimes in spite of their best efforts, the sounds the trio produce fall into being background music rather than drawing your full attention.

As I say, let’s look at that musicianship, as it’s really where their strengths are. The Italian/Irish trio create a remarkably full sound for just two guitarists and a drummer. The interplay between the guitars is deceptively intricate – it sounds like there’s quite a bit more going on than there actually is, if you follow me, a talent not to be scoffed at. Take the album’s title track Erode, where they move from a pensive, moody mixture of bass notes and held chords into probably their most rocking moment about halfway through: they’re joined by a viola for the first half, sure, but it’s when they hit that heavy section and the twin guitars are riffing in tandem that they sound at their biggest.

“Pensive” is perhaps the word that comes to mind through most of the album. It’s deliberate, well-paced, and knows when it kicks into those heavier moments it still seems very much like they’re in control. The problem is, you wish they weren’t, that they’d let loose a little more, allow themselves to be a little more raucous. And strangely, even though the album incorporates plenty of changes in mood, tempo and volume, it’s strangely un-dynamic. There’s no real tension, no release, which is something this kind of music really needs in order to work.

It’s hard to pick a highlight as nothing really jumps out. That’s not to say there’s any bad songs here, on the contrary, it’s all fine. It just seems to lack fire, feels a little dispassionate and passive. To their credit, Traum seem to have come up with something of a recognisable, personal sound here rather than simply aping other bands of a similar ilk, and their sonic landscapes are quite pretty in places. Personally though, I guess I just prefer my scenery a little more untamed.