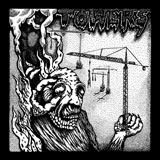 Providing further evidence that Oregon is literally built upon an ancient Indian burial ground, yet another otherworldly and insanely heavy band comes forth proclaiming Oregon as their home state. Of course, there’s already Yob, Norska, Lumbar, Lord Dying, Red Fang, Unsea, Atriarch, and a plethora of others – a very healthy showing indeed. But here come Towers, a bass and drum duo from Portland whose second album – the appropriately named ‘II’ – is a very small slither of hell caught on record.

Coming in as they mean to go on (i.e. on a wave of unsettling noise), opening track ‘Hell’ sets the mood for the whole record. Rick Duncan’s bass set-up is rigged to facilitate both penetrating treble and punishing low end so when combined with various effects pedals and the energetic drumming of Darryl Swan, the hugeness of the sound betrays the fact that Towers are a two-piece. ‘Hell‘ is an unsettling melting pot of post-punk, noise rock, art rock, and heavy metal, framed like one of Tom Waits’ nightmare visions. In fact the tone is so full-on that it gives off a strange circus atmosphere, almost comedic in its overblown execution but too close to the nerve to be anything but terrifying.

Elsewhere ‘The Door At The End Of The Hall‘, with its Theremin-like atmospherics and Duncan’s dramatic proclamations and forlorn backing vocals, has a horror soundtrack feel to it, suitable for any number of 1970’s exploitation movies. But it’s the bleak penultimate track ‘The Chosen‘ which is the most haunting song here; the monk-like, counter-melodic chants are nauseating and discomforting, a final demonic taunt before the violently chaotic final track ‘The Room Of Misfortune‘ which hammers home the vision of suffering which ‘Hell’ started. And then as quickly as it arrived, the deranged circus leaves town.

As an album ‘II’ is mournful, but not in a gothic, woe-is-me kind of way. Rather, it’s demented and theatrical, revelling in bringing you bad tidings and burying a feeling of doom in your guts until you’re left weeping in a corner. In fact, for a band who don’t throw the term ‘doom’ down your throat like so-many so-called doom bands do, they’ve released one of the most doom-instilling albums I’ve heard in the last year. Towers aren’t strictly a doom band – they bring together a wide range of heavy influences from the full spectrum of punk and metal and combine them with a cinematic quality to create compelling, creepy and hypnotic songs to wallow in. And the results are magnificent. So if ‘II’ is a glimpse of hell, then pray for my soul, dear readers, because it sounds fucking grim.