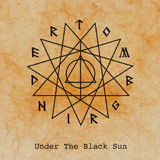 What is in a name? Some bands have monikers that make you involuntarily throw your hand into the air in the form of a hooked sky claw, thrust out your lower jaw defiantly at a cruel universal and know, really know, that this band emote your feelings.

There has been a rash of great ones lately, for example Stoneburner, I mean what force is so powerful it can burn stone? Similarly London’s Tombgrinder have checked the box with a mighty sounding name.

When you think of a tomb you tend to think of a stone built mausoleum, therefore the vibe of this band is so monumental that is can grind stone to dust; not only that but the images evoked by grinding a sacred resting place to dust is one of hopelessness and over whelming power.

Or maybe my imagination just runs away with me?

Certainly the band’s accompanying musical output could probably be pictured by words such as’ monolithic’, ‘cavernous’ and ‘seismic’ as Under The Black Sun offers the listener 3 slabs of fuzzed out power that hit like the force of tsunami.

Recorded in a totally DIY fashion, the instrumental Stoner/Doom band called on the talents of Dave Wilbraham to master the mash up of downtuned riffs into something that befits their name.

The oddly titled opening track Beardhammer is a powerful grinding jam work out that ebbs and flows, teasing the listener with tempos and texture which almost serves as an intro for the title track, Under the Black Sun. At just over five minutes there is plenty to get stuck into riff wise as the band give nods to Sabbath and the Doom scene that has risen from the likes of Master Of Reality and Vol 4. Given that Tombgrinder are an instrumental venture, the band have to keep the listener’s interest and they try not to over indulge an idea, constantly shifting the sound around and coming back to a core idea before taking flight into another direction.

The title track beings ominously, building on what has gone before, the deep groove gives way to more stretched ringing work outs that have the head nodding along as the  guitar fuzzes deliciously and the drums crash in the background. The track proceeds at a stately march and in similar fashion to the first exploring themes and creating passages of musical movement and progression. Technically it is pretty accomplished stuff, but at nearly 12 minutes and no vocals, at times I found my attention wandering, although some nice psychedelic lead work towards the end brought it back round in time for the big finish.

Final track Bill Wards Burning Beard is a cheeky homage to the band that started it all and it rocks along on a riff that could have easily been raided from the cutting room floor of any of the first five Black Sabbath albums. Starting off at a breakneck pace, full of driving groove and crashing drums, it morphs into a crawling track that nods back to what the band has done before.

Tombgrinder slowly build from this point to a huge ending that crashes and smashes with power and does little to leave you in doubt they are a band full of conviction and ability; not to mention a handy clever side as there is a common theme that unites all the tracks as they navigate their way through dense musical passages that feel like they belong together instead of a collection of riffs bolted together.

For two guys (Mark Roberts on guitar and Leigh McSharry behind the drums) there is no doubt that Tombgrinder have created an EP of focused and heavy noise that showcases them as performers, but somehow I am left feeling that I want a little more. Whether this is because Under The Black Sun is (comparatively) short and doesn’t have time to explore more avenues or the selective nature of the project means it is occasionally missing an extra depth of dimension to make it more than just another well executed Doom work out is the big question.

Under The Black Sun is decent enough and there are unlikely to be too many complaints whilst nodding along to it, but it’s whether there are enough hooks to keep the listener going back or whether it will get buried by the competition.