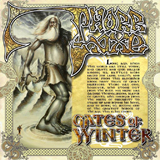 The name Thorr-Axe was what attracted me to this band. I’ll admit it, I read it and thought, ‘there’ll be some fine, sword swinging Grand Magus style doom right there with a name like that.’ I suppose it seems a bit daft after you think about it, but sometimes a good name can get you far in this world.

The grandiose build of Open The Gate is a swelling, scene setting song. It feels like the trek to the base of the icy mountain, the start of the journey, with battles and frost to come. The Seer’s Vision is the following moment, where the bludgeon begins. There is a grand heft to the riffs, coupled with a harsher vocal performance than expected adding a bit of rawness to it. There is a coupling here of the blood and thunder of doom and the shimmering coldness of atmospheric black metal.

The crashing directness of Four Hooves is much more directly doom, although at a much higher tempo. There’s also even tinges of hardcore about it, a feeling that also rears its head in Mountain Crusher. It is more of the direction that Neurosis took than anyone like Sick Of It All, but there’s a definite influence in there somewhere. Black Flag maybe. Thorr-Axe are definitely not your average sword and shield battle doom band, and that’s to their advantage really because no one does it better than Grand Magus anyway.

The slow, grooving swagger that powers the initial moments of The Forging Ritual is a particular highlight for me; a lurching riff of low end blues that contorts into a sludgy gallop. Thorr-Axe aren’t a band that seem comfortable in one place, confined within one genre. They mix in elements of doom, sludge and black metal, with dashes of post metal atmospherics. They allow riffs to breathe, crank up the intensity (like the bug eyed spasms of the title track) when required, but also have some lush icy moments of vastness that are just sublime (again, see the huge ending to the title track).

The skull caving Descent is a good example of the mixing of styles. The crush of doom, the nihilistic bent of sludge and the vocal rawness of black metal meet within five minutes of pure metal. The ghostly intermission is a moment of calm; of tranquillity before the storm of the fourteen minute plus closer Awakening. This is the piece de resistance here, a titanic slow burner that detonates in a hailstorm of sludge riffs, whilst adding dashes of vintage doom and nasty, angular hardcore thunder. When the glacial, atmospheric black metal parts appear at the end, you realise what a brilliant closer it is.

Thorr-Axe look to have put together one of 2015’s earliest watermarks for quality sludge doom with all kinds of interesting bits. The Gates Of Winter is confident in its quality, and Thorr-Axe show they aren’t afraid to tinker with their formula in order to produce results.