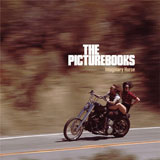 Bands like the White Stripes and The Black Keys have a lot to answer for. In their wake it seems to have become acceptable to dispense with the services of a bass player and mine the delta blues for all its worth. Well, The White Stripes fell apart as Jack White’s musical vision outgrew the limitations of the 2 piece format and The Black Keys have become media darlings and now seem to take the stage with more additional musicians that The Rolling Stones employ these days!!! So, when faced with yet another blues rock duo the initial prospect is considerably less than appealing. Fortunately my many years on this planet have given me the foresight to listen with my ears and not my prejudices as this album from The Picturebooks is really something.

Yes, there will be inevitable comparisons made with bands such as The Black Keys, and this does have definite echoes of that band’s earlier works when they still possessed the filth and the fire to create something that truly deserved the term garage rock. The Picturebooks create a sound that is thick with sweat and desert dust that paints a vivid picture of the American Mid west. It is the soundtrack to lazy days baking in the sun on the back of a Harley drinking Bud and checking out hot chicks in denim cut offs. This is even more remarkable considering the band is German!!!

The guitars are fat and covered in a layer of grime whilst the drums hammer with a Bonham like intensity. The whole effect is set off by a dose of reverb that almost acts like an extra instrument giving the sound great depth. At the core of the band’s sound lies a superb ability to craft excellent songs that actually use the 2 piece format to its best advantage remaining catchy yet dynamic. The sound is sparse but the sparseness is used by the band as one of the key elements of their song writing as they allow the songs to build in intensity whether it’s on the quieter songs such as E.L.I.Z.A.B.E.T.H. or on filthier, heavier tracks such as Your Kisses Burn Like Fire.

The music is dark, sombre yet somehow uplifting as they pepper the swampy riffs and thundering, simplistic drumming with choruses that resonate and offer the listener the chance to sing along. This may sound like an odd comparison to make but The Picturebooks hit upon that same sing-along chorus and chant formula that Bon Jovi used in their 80’s heyday…only The Picturebooks aren’t shit!!!!

These guys seem to have come from nowhere and are suddenly gaining a lot of attention, and deservedly so. They may be using a well thumbed formula but they do it so well. Imagine if The Black Keys had grown up listening to Black Sabbath and hadn’t started hanging round with Johnny Depp and you have The Picturebooks!