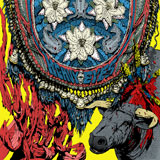 Well, Kozmik Artifactz records from Germany have pulled off a significant one two punch of late in the retro rocking stakes. No sooner has the Shaman been party to the wonderful sounds of The Dirty Streets and their album “Movements” we are hit with the sleazy grooves of Tennessee three piece The Heavy Eyes and the vinyl release of their album “Maera”

This is perhaps no coincidence as both The Dirty Streets and The Heavy Eyes share some significant stylistic similarities. Both bands feature a stripped down and raw sound that draws heavily on 70’s influenced heavy blues rock in the vein on Led Zeppelin, Humble Pie, Mountain, Cactus…etc. Of the two The Heavy Eyes are by far the heavier prospect adding a harder edge to their sound that stops short of being too metallic but possesses enough guts and stomp to keep most Sabbath heads perfectly happy.

The opening duo of “Levantado” and “One Hand On The Buffalo” perfectly display the band’s knack of writing brawny riffs dripping with machismo and backed up with a solid and punishing groove that just shows that, despite being dead for nearly 33 years, the influence of John Bonham hasn’t diminished one tiny bit. Elsewhere on “Maggie” there is a hint of the Black Keys pop inflected blues proving that The Heavy Eyes are not just riff mongers but can pen a killer vocal hook as well. Vocally, guitarist and vocalist Tripp Shumake displays a lazy, laconic drawl that has echoes of Ian Astbury of The Cult albeit on a southern rock sabbatical. It has to be said the band as a whole fully locks together as a cohesive unit with the rhythm section of Wally Anderson and Eric Garcia combining in perfect intuitive classic power trio style.

Aside from the epic, 9 minute plus closing instrumental “Aplomado” that builds and builds on an incessant bass line, all the songs here are brief, fat free and to the point, displaying the classic “don’t bore us get to the chorus” mentality…which is perfect for those of us with short attention spans and little tolerance for over indulgence and excess. It’s one thing to throw every riff you have into a song but quite another skill to know when enough is just enough and you have the chemistry right. As the saying goes, “keep it simple sucker” and The Heavy Eyes keep it simple and all the more effective for it.

Without wanting to draw more comparisons than is necessary, like The Dirty Streets, The Heavy Eyes have opted for a naked, live sounding, warts-and-all production that bristles with energy. The playing isn’t flawless and that adds to its appeal and charm. Overdubs are minimal and well placed serving to add texture rather than weight as the band have no shortcomings in that direction. This is a band who you know full well will deliver on stage, particularly in a sweaty club with sticky carpets and girls shaking what God gave them!!!

The Heavy Eyes are yet another band that have totally passed me by in the past but thanks to Kozmik Artifactz have been given a bigger platform to display their perfectly honed nuggets of hardened blues to the world. They’re not trying to play slower, heavier, nastier, darker or any other boring adjective that bands these days seem to attribute to their music, The Heavy Eyes just want to play great, timeless rock and roll…and they do, they certainly do!