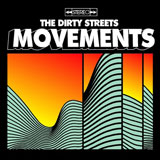 In its near 60 year history many “movements” have come along that have tried to derail rock and roll, and some have nearly succeeded but with bands like Memphis, Tennessee’s The Dirty Streets still lurking in the undergrowth it will always have a vital beating heart. This three piece know the value of keeping it simple, keeping it pure and keeping it heartfelt.

Retro rock is undergoing something of a revival of late with bands such as Rival Sons chasing the coat tails of giants like Led Zeppelin and The Dirty Streets do share some common ground with that band but also infuse it with elements of Humble Pie, Free, The Black Crowes and The Rolling Stones as well as classic 60’s soul and R&B. Guitarist Justin Torland possesses one of those gutsy classic blues voices that drips with emotion, particularly on the Led Zep stomp of “Broke As A Man Can Be” and the psychedelic strains of the title track. This is a band who, not only know how to write a great riff and a great, attention grabbing melody, they also know how to pace their songs with dynamics and above all a monster fat groove.

The Dirty Streets also know the value of keeping it simple. Whereas many retrogressive acts will over egg their pudding with backing singers, keyboards galore and multiple overdubs, these guys keep it as stripped back and raw as possible. Only the occasional doubled vocal might betray that this is anything other than a live-in-the-studio production. Torland, for the most part, utilises only one track for his guitar rather than the accepted practice of overdubbing and far from leaving the sound empty, this only serves to highlight the great interplay between Torland and the rhythm section of Thomas Storz on bass and Andrew Denham on drums, who keep things grooving in suitably old school style. A nice and lively reverbed mix also adds hugely to the overall ambience. These guys have totally got their shit together and don’t need to hide behind walls of distortion, multiple tracks or pointless effects. This is a band who can go into a room…any room and sound great…and that’s the sign of a truly great rock and roll band!!!

The Dirty Streets may be a new name to most but this is actually their second album, and more remarkably was released a couple of years ago but has now been given a much needed shot in the arm by Kozmik ArtIfactz who are releasing this on vinyl. It’s a good job they are, as they will no doubt bring the band to a whole new audience. I for one will be keeping my beady eyes peeled for their first album and watching them with great interest from now on.

In a music industry dominated by pigeonholes, scenes and genres, The Dirty Streets are a band that exists out of time. Their sound may be retro in spirit but the fact is truly great rock and roll and great songs are timeless…it’s all just waiting to be heard!!!