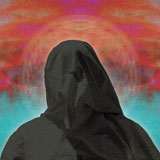 The Cosmic Dead are a self described “psychonautal cosmodelic quartet” from Glasgow, with a string of UK and European dates coming up in December. In the not-quite-four-years they’ve been together the group have managed to clock up two live releases and six studio ones, the latest of which is a split with Newcastle-Upon-Tyne rockers Pigs Pigs Pigs Pigs Pigs Pigs Pigs.

22 minute Cosmic Dead track ‘Djamba’ forms the A-Side of the release. A driving, almost Dub-like, rhythm section powers along at a motorized pace and the listener feels like they’re being taken on a journey with the bass and drums providing the transport. The aural scenery that whips past varies from delay drenched high-rise riffs to analogue synth carved valleys but, although we speed up and slow down tantalisingly on occasion, we never stop. This is a tour on a psychedelic circle line – and a very enjoyable one at that – where the listener is nevertheless returned safely to their point of origin at the last stop.

‘The Wizard and the Seven Swines’ is Pigs Pigs Pigs Pigs Pigs Pigs Pigs’ 22 minute contribution to the split. On their bandcamp, the track is tagged “doom metal, noise rock, psychedelic, sludge metal” but to be perfectly honest, I’m not hearing much of any of that in there. Musically, the sound is more like a very well produced 90s Grunge (or Alt. Rock, or whatever the hell you’d call it now) band than anything else, reminding me – not unpleasantly – of the likes of Tad, For Love Not Lisa, Kepone, and others I’ve barely thought about in fifteen to twenty years. All that said I actually enjoyed the track which has the relentless energy of a band who it seems certain will deliver live.

All in all it’s an interesting split with each band projecting a very different sonic image despite both tracks being mastered by infamous producer, and re-mixer (of the likes of ISIS, Sunn O))), Earth and Pelican) James Plotkin. If you like the idea of an audio smudgy, trippy train ride that drops you off at a soberingly crystal clear and unrelenting rock show, you’ll enjoy it as much as I did.