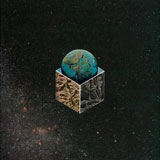 The first time I ever saw The Cosmic Dead live, they were playing a double set at Mono, a vegan cafe / awesome record store nestled in a remote corner of Glasgow’s Merchant City. As I was walking to the venue, I heard a deep, pulsating rumble, like the Earth working through a dodgy curry, and I feared that I’d arrived late. As it turned out, that was just the soundcheck. Their actual sets that night were infinitely louder, a spiralling wheel of out-there apocalypticism, and as I woke up the next day with what remained of my hearing, I knew they’d found a new fan. Three years and several albums on, ‘EasterFaust‘ shows that zee Dead still know how to rock out with their beards out, but they have managed to expand their repertoire while being able to focus and hone those big, bastarding riffs to equally explosive ends.

Side A of this 12” starts off as quite the opposite of full-force The Cosmic Dead, a hazy riff looped over lazily beaten drums and distorted mutterings, the ghost of a bassline humming assuredly in the background. It lolls in this rolling soundspace, a Red Room for the burned and the too-far-gone, and gets increasingly weirder with manic wails of guitar and synth but, just when it looks like things are starting to clear up, the room’s walls are ploughed through by a bulldozer of a jam, a bounding Krautrock juggernaut that could only come from too much bad cider and too much good Hawkwind. They fire forward with the urgency and drive of a space-rockin’ Terminator, James T McKay’s steadfastly insistent guitars occasionally broken by flurries of distortion and chaos while Omar Aborida lays down a groove so solid that physicists could set watches by it. It builds into a place of complete, overwhelming sonic mastery, the guitars becoming an insurmountable presence while Julian Dicken works his kit at a frenzied pace, and it’s impossible to hear without remembering those monolithic jams of yesteryear.

Side B takes up the essence of chaos but sprays it more wildly – less Hawkwind cosmic drive, more Acid Mothers Temple cosmic overdrive. McKay sends his guitar flailing across a jagged and broken land, Lewis Cook firing signal flares of squelchy synth while Dicken beats out schizophrenic Morse code musings before the song settles into another wondrous groove. Rather than ratcheting this one up too, it becomes almost… catchy, in a typically outré manner. McKay’s melodically oriented soloing here is magnificent, and, coupled with textural burst of sound from Cook and Aborida’s loose momentum, it even starts to resemble Monster Magnet. Well, a bit, anyway. It still captures their almost intuitive flow but it’s damn sharp and borderline infectious, a danceable gem that births and grows over a mere twenty minutes.

The thing with bands like these is that they are simply meant to evolve. They must keep moving and switch things up or they will die or, worse, become really bloody boring. From what is on offer on ‘EasterFaust‘, boring is nowhere in the cards for The Cosmic Dead. It captures their free-wheeling essence, the blunderbuss blast of their live shows and the almost psychic manner in which they feed off each other’s impetus, but it delivers it across the broadest spectrum available. Tying in new avenues of expression and sonic delicacy, they’re becoming more distinct and unclassifiable with each successive album they put out and becoming a stranger, more incredible beast. Or, as the great Dr Might put it, they’re becoming too weird to live and too rare to die. Selah. 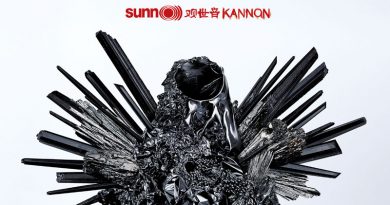