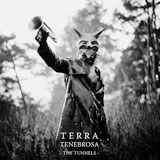 I thought I knew what to expect with this first release by Terra Tenebrosa featuring members from Breach. I had anticipated hearing post-rock/post-metal very much in the vein of their preceding band. Sometimes it’s useful to be given the heads up about what bands the members have been in, but if you think you are going to get anything from the Breach reference then think again. If these guys were once in Breach then at some point they decided to turn left off the main road and proceed down a very dusty dirt track into the wilds of their home country, Sweden. Perhaps what we have here is the logical process where the obvious elements of post-rock have been taken to their most extreme conclusion. I would therefore refer people to Skinny Puppy or Front Line Assembly with a gram or two less of the industrial…..but by likening Terra Tenebrosa to what were once iconic bands doesn’t actually get us much further down the rabbit hole, because I need to understand what kind of beast our Swedish compatriots have released into the tunnels.

There is with this release an aesthetic theme that has been adopted. Although the album is entitled The Tunnels the focus for the composition is apparently Terra Tenebrosa’s monarch, “The Cuckoo”. Now all of this is well and good, yet I have no idea what this means. Assuming The Cuckoo is the archetype of chaos imbues a confidence in our understanding, however this is short lived due to not knowing what the meaning is when chaos meets up with tunnels? Perhaps I am getting too bogged down by the theoretical bent of the aesthetic rather than paying attention to the music itself, which is very interesting indeed.

What Terra Tenebrosa provides is a wondrous array of captivating musical compositions bearing greater relation to classical music and motion rather than derivative rock based music. With every song the band manage to create a overarching hue, an embracing composite made from the merging of colours portrays an impending doom. Vocals course through the atmospheric ambience of guitar, drums, and violin. Feedback peaks, piercing the haze of distortion. Samples barely audible to the human ear invoke the intent of darker imaginings.

When I first heard this recording my initial reaction was to draw comparisons with LA band Blast. The title track to their first album “It’s In My blood” resonates with what I’m hearing. Slow, considered, observant chord progressions pull the seeker into a swirling void of self-annihilation. Core riffs form the basis of every song, from then they build from the root upward and outwards, eventually emerging from the gloom, the marked fruition is only realised by the unfurling of their blackened wings. So take flight my beauties into the abyss for this an intoxicating fix.

Highlights on this record are ‘The Morning Stars’ and the ‘Arc of Descen’t’, but all seven songs cause you to pause and think about what must have been going through the members mind when they formed this Leviathan. It’s rare you get to hear music unblemished by what has come before, all the comparisons I have used only partially convey who this band are and what they sound like. Curiosity should therefore get the better of you. So release the feline and check this band out, you will be pleasantly surprised by this mesmerizing ode to stolen dreams and the long damp dark without end tunnels, portals to your mind, the door to the end, for salvation will be best savoured by those who propitiate the stealer of souls, The Cuckoo. Welcome into this world a truly phenomenal band Terra Tenebrosa, the Swedes have done it again…Hail Sweden, Hail Terra Tenebrosa. The shattering of souls signals a new beginning, so don’t dare ignore this you fools! Brilliant!