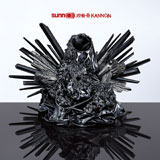 Sunn O))) have made a career out of taking their ‘signature’ sound, huge walls of reverberating guitars that punch holes in space-time, and adding new elements as the releases progress. Whether it’s Atila Csihar’s ritual vocalisations, sudden trombone invasions or even the obvious-in-hindsight chatter of a pneumatic drill, all of these building blocks have added to the mythos that swirls around the band’s core duo. Kannon is no different in that a new ingredient has been added to the mix and, by being new, becomes the dominant theme of the release; curiously, that new ingredient comes in a box marked ‘boredom’.

Now, most normal people think that Sunn O))) are boring to start with. They’re wrong, but it’s an understandable position to take and one that, based solely on the evidence of Kannon, I would find very hard to argue against. Where even the starkest Sunn O))) releases to date have taken the ‘minimal is maximal’ philosophy to their logical conclusions and gained depth because of it, Kannon really is little more than guitars going CHUNNG CHUNNG CHUNNG over and over again.

I find the opening track, Kannon 1, hard to listen to. Not because of any extremity of expression or challenging presentation but because it feels like it goes on for so very, very long. It’s only twelve minutes, a pop song in drone metal terms, but the finger is hovering over the fast forward button before it’s even three-quarters of the way through. There are a handful of excellent moments when either a slab of bass drops in from the stratosphere or Atilla’s vocals stretch out inhumanly but they’re never really built on and aren’t enough to sustain real interest.

Kannon 2, even the track titles adding to the will-this-do feeling, plows a similar furrow by layering some faux-Buddhist incantations (no doubt intended to back up the album’s title, the Japanese name of the bodhisattva Guanyin) over what could quite easily be a Black One outtake, even to the point of nicking some of the riffs. Which is where I realise, to the point of sub-titling this review “The Emperor’s New Robes”, that Kannon is just Grimmrobes Plus. A few extra vocal bits, perhaps a better production, but pretty much still the same. The inevitable Kannon 3 is a better track, where shards of wavering guitar riff are scattered sparsely over Attila’s gurglings, but I have to admit that I just don’t care anymore. I don’t need to care, having heard the core elements of this record over 15 years ago.

And then it stops.

Thirty-odd minutes of music that never really goes anywhere, suddenly goes away as if even the band themselves couldn’t be bothered anymore. It doesn’t feel right to judge a band on past releases when thinking about something new, but with this being such a backward-looking release it’s probably worth remembering that White1’s My Wall is only a few minutes shorter but manages to wrap Julian Cope’s neo-neolithic incantations in an infinity of invention compared to this ‘back to basics’ banality.

I’m sure that many people will love this, and other reviews show that they do, but I can’t recommend it. Old Sunn O))) fans pretty much already have this record anyway and new fans might as well just borrow Grimmrobes off someone. Or Black One. Or Monoliths & Dimensions. Or Soused. Or anything else but this.