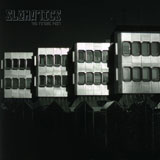 I first caught wind of these Belfast bangers back when they had a split with Agent of the Morai, super heavy, super low, super slow and doom to the bitter depths of your grinder.

Their latest release, The Future Past is somewhat of a beast; track one swings in like a sonic wrecking ball with so much force behind the guitars it brings a tear to the eye. Named ‘Running Battle’, this track annihilates all with extreme fuzz devastation and haunting vocals. The added bonus of this track is that it is peppered with very slight analogue synthesisers and odd noises that arrive in the mix without prior notice.

With Slomatics releasing two tracks on this recording, it really is a short but sweet affair, longevity in a band always yields excellent results when playing skull crushing doom, the next track ‘Son of Ampbreaker’, is another thunderous, ear-decaying monster of fuzz and brain-rattling drums. There’s not much missing from this release apart from more tracks!

As the record lumbers on like a giant with a sore arse, the band seem to push their staple sound into a slightly more progressive and slightly more upbeat mood albeit with more of a modern twist to the recording techniques and recording process. The vocals and guitars are nothing short of excellent on this; they wouldn’t be anything without drums though.

This is one record that is compulsory if you dig doom and you want to hear the original Irish alchemists at work as well as what might actually be where doom is heading in the future.