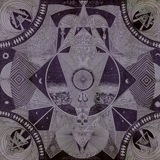 Ladies and gentlemen we are very definitely floating in space here. From the slow feedback oscillation and filthy bass of instrumental opener I.V.E. I – Circumambulating Mount Meru through to the final race to the cosmic finish line at the end of Triads And Trishulas, Norwegian rough riders Spectral Haze have succeeded in delivering a fine, fuzzed out trip in an amp shaped rocket to the stars with this piece of freaked out, fucked up trance riffage.

Take the idea of “desert rock”, the tag we all used to describe Kyuss and their ilk – now imagine if that desert was on the moon. That’s not to say that Spectral Haze sound like the Californian legends (they really don’t bar a natural, earthy recording here – I won’t use the word “production” as that doesn’t seem right), but they have managed to achieve the same track of using a low tuned, driving take on riff driven rock to create a kind of mental landscape with their music. The phaser drenched guitars, the bubbling synths, the almost motorik rythym section. If you close your eyes it’s like easy to picture this being the soundtrack to some weird sci-fi adventure.

Spectral Haze honestly sound like an evil, greasier Hawkwind in places here – imagine if they’d had less of the mantric bent, more of a self-destructive streak. Listen to the first chord that comes in on Black Gandharvas and the snarl it has buried in it; it says so much about this band in that one effected pounding chord. That song is the stand out here, both pummelling and grooving at the same time, the simplistic riffing swirling out of the amps over furious, buried vocals as the song picks up momentum.

Descent Through The Intravoidal is another fine example of the fact that while they may have the trappings of what we refer to as Stoner Rock or what have you, Spectral Haze are really a straight up heavy metal band with a dark, deeply psychedelic bent. They’re surprisingly aggressive, there’s an urgency to this music that leaves most of their lazier peers in the dirt. It’s interesting to note that at least one member served time in the excellent Mare (the Norwegian Black metal band, not the Jeff Buckley gone Doom trio on Hydrahead), the darkness and drive here is something both share, regardless of the gulf in style.