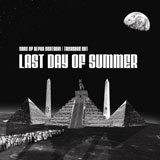 Now, in my experience, collaborative recordings tend towards a certain ‘jamminess’ or lack of focus, but NO SIR, none of that here! In fact, it all sounds and feels as tight as a gnats chuff, as the saying goes…so much so, in fact, that I would go so far as to suggest that they sound like they’ve been playing together for quite some time. Now, with the players involved being on different sides of the big pond, I’m not sure what the logistics of rehearsing and recording would be, but whatever they did, it has payed off in spades. Alpha Cat are a lean, mean rockin’ machine!

To these ears, Will Mecum (Treasure Cat guitarist and ex-Karma To Burn member) is ALL over this recording, with many of the tracks bearing his signature riffage and sinuously tasteful lead playing….but, in a collaboration THIS seamless, who can really tell? All I know is that tracks such as ‘The Flying Dutchman’, ‘Valhalla’, ‘Fire’ and (containing my personal favourite riff along with some HOT cowbell action) ‘Dresden’ have his fingerprints all over them, and tracks ‘Battle Of Britain’, ‘Tribute To Harmonious’ and ‘Under Surveillance’, with its GREAT spidering main riff and stop-start section, showcase the more unusual side of his playing, as brought to bear on KTB’s fantastic first record, the Joy Division cover ’24 Hours’ in particular.

Of course mention MUST be made of Sons Of Alpha Centauri guitarist Marlon King and bassist Nick Hannon for their part in this, along with TC drummer Roy Brewer and SOAC drummer Stevie B. Maybe I’m being unfair to Marlon King in highlighting Mecums part in this, as it IS difficult to tell who is doing what, but it sure as hell FEELS like Mecum is ALL over this recording. Nonetheless, as a collaborative project it really does succeed, BIG TIME, in highlighting the playing of all involved and their ability to interweave with each other seamlessly.

As with ALL of the best instrumental music, vocals are not missed AT ALL, due to the dynamic feel and structure of the music. Fans of either of the bands involved, Karma To Burn, or even early Queens Of The Stoneage or Desert Sessions releases are URGED to pick this release up ASAP…it’ll rock your li’l socks RIGHT OFF.