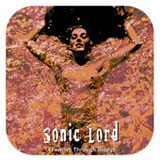 I take it you’re all familiar with Black Sabbath. Just take a moment to reflect and think back to some of you favourite classic Sabbath moments…done that? Always a pleasure isn’t it. Now imagine how that would sound if messers Osbourne, Iommi and co had been force fed ketamine. It’s still recognisable but not so nice isn’t it? Now imagine Sabbath force fed ketamine and chained to a wall in a filthy cellar while their girlfriends are getting fucked in front of them by a biker gang. Ladies and gentlemen, welcome to Sonic Lord!!!

Never in 40 years of the existence of doom and stoner rock has it ever sounded so pissed off and so vital. Sonic Lord take those first 6 milestone Sabbath albums, encase them in granite, shoot them through with iron rivets, wrap them in barbed wire then throw them down a steep staircase at you.

This 7″ release on the small but perfectly formed Catacomb Records offers up a teasing two tracks of prime sludge doom. The riffs come thick and heavy. Dave Day, also of Aluna and Godsize, is a master of economic and effective bludgeon. Dream Theatre this ain’t…thank fuck!!! You’ll be remembering these riffs in the same way you’d remember being butted in the face…but you’ll love it. Vocally this is nasty stuff. Whereas most metal vocalists will grunt and growl in some vain attempt to sound aggressive, vocalist Rich sounds like he is being compelled to drown out the voices in his head!! His impassioned and heartfelt bellow is delivered with a needle-sharp clarity that jabs its thumbs into your eyeballs. I dread to think what this guy will be like live, surely he can’t keep this delivery up without suffering an aneurysm or at the very least a full anal prolapse!!!

The production here is everything you would expect, heavier than a 20 stone dude hanging off your nuts by his fingernails. Turn it up and feel your eardrums pulse.

Catacomb obviously care about delivering a quality package. The artwork is fantastic featuring a naked chick…trawling through sludge. Not only is it literal, it also has a naked chick…perfect!!! This is also on gaudy orange vinyl and comes with a Sonic Lord plectrum. A nice touch that makes that little bit of difference over a CD. Buy this, even if you don’t have a turntable buy it as in a few years time this will be regarded as a milestone release. Now, where’s the album?