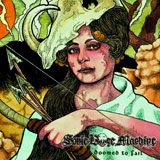 Sonic Booze Machine hail from Berlin, Germany, and were formed in 2007. Now, it’s true a band with a name like this doesn’t leave a whole lot to the imagination, but that isn’t a bad thing; in fact, one can actually praise them for coming up with something that totally represents the music they create: sonic because they are fast (and furious, like the franchise) and booze because the listening experience is much more fun if one gets drunk. That doesn’t mean the album only sounds good under the influence of alcohol: far from it, if you are sober, you can still have a good time … if you get hammered, though, this is the perfect soundtrack to those wild and crazy moments you will experience. This might be enough to get your attention, but let’s carefully analyse what we have here.

If, on one hand, their sound isn’t exactly ground breaking – they are your typical sludge/stoner band with some doom metal  elements and hardcore-inspired vocals – what they produce is good enough for any fan of this genre (or heavy music in general) to give them a chance. After all, not every group can create new game-changing records. In other words, if everything is original, then the listener isn’t surprised anymore and thinking outside the box becomes the norm, watering down the impact of those who break new ground in their quest to discover new ways to evolve musically.

Another thing to keep in mind is that simplicity can be used as a weapon, and Sonic Booze Machine use it effectively, opting for a simple, straightforward and brutal sound.  Their musical recipe has loud guitars as the main ingredient and is cooked with passionate precision, resulting in a delicious dish that will make those who love good riffs feel like they’re in heaven. Just listen to Rhinonaut or Iron Walls and you will headbang like there’s no tomorrow. The atmosphere throughout the album is heavy and intense – think of Baroness or High On Fire – but this is more than just a pure and powerful sonic assault; there is a sense of melody and some variety. This War Is Mine, for instance, features some chanting towards the end of the song, emphasising the desire for an eclectic and experimental approach.

This impressive debut album also has moments filled with bluesy guitar lines, making it clear that the puzzle is more complex and diverse than we initially thought.  But, at its core, this is a fun, noisy and guitar-driven party. One for the ages, I might add!  So go buy a six- pack of beer, invite some friends to come over to your house, and rock out!