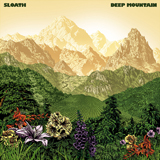 Stoner metal is a genre thrown around a bit freely, in my opinion – if a band is really tight, really together, really clean – well, it doesn’t fit the genre descriptor, y’know? You can have as many bad weed references in your song titles as you want, if the atmosphere isn’t there than it doesn’t mean anything.

Which brings us to this album. From what I remembering hearing from their rather cool and unfortunately rather obscure debut, Sloath were one of those super stoner bands, everything wreathed in a super hazy vibe, this opaque mixture of bong smoke and feedback that was rather beautiful – stuff that actually delivers on all the blurred, “woah man my hands are HUGE” feeling that a genre called stoner metal should bring.

Here, unfortunately, they’re closer to one of many bands that heard Into The Void and thought it would be cool to do the exact same thing… but all is not lost. Amidst the solid-yet-unremarkable Sabbath workouts there’s still a bit of weirdness – the moaned, reverbed-out vocals, the tendency for the riffs to possess that hard to quantify, deliciously mind numbing feeling that the best super stoner metal bands – Sleep on Dopesmoker, Saturnalia Temple’s Ur, maybe even a lot of early Om – have in spades.

Yeah, it’s a hard album to think about while you’re listening to it, and that should be taken as a compliment. I kinda wish the more psyched out moments took a more centre stage – few more of those weird effects, few more extended jam sessions, a tendency to sit on riffs for way longer than any sober person would deem necessary – but it still achieves the atmosphere that I mentioned in the opening riff. Sure, a few more tunes like The Toucher (a bit of a Black Hell vibe from this tune, which is a pretty cool thing) and a few less Juvis Priestlys would be kinda cool, but I don’t want to nitpick. It’s a very pleasurable listen – perhaps not the totally stoned monolith of the first full length they did – but it’s still really quite good. Worth checking out, worth (I assume) seeing live, and be sure to give their debut a listen too!