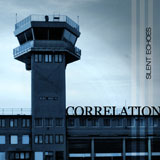 Correlation is the second album from the German 3 piece Silent Echoes. If the name doesn’t give it away then the album tags will. ‘Ambient’ ‘Art’ ‘Rock’ AAR . . not a pirate! Transmutation. It’s a fully ambient piece that pulses into existence with ominous feedback, enthused rhythms before it drops us into a beautiful acoustic set piece towards the end that reminds of Ecstasy Of Gold.

There’s no specific build up to the album’s title track. Transmutation fades into nothing and Correlation then beats its way into existence. It’s the opposite of the previous track now heading into the realm of drums and deep bass. Besides the heavy scream towards the end, we still don’t have any vocals, instead we’re introduced to some nice quotations that roll along well with the background tune. I’m not sure where they’re from but the text fits well. Dark and foreboding, it ends with a wickedly heavy hit.

Hollow Walls changes the mood yet again, with immediately light hearted vocals, it changes the pace quite dramatically. It’s a very soft piece of music heavy on the vocals compared to the previous tracks that were mostly instrumental. The track actually reminds me of the band The Promise Ring. In the background we have an easy going acoustic guitar, soft drum beats and some heady rhythm. This is a definite piece to mellow out to.

We carry on at a relaxing pace into From Afar which continues the acoustic guitar and soft drum beats. It’s another heavily vocal track and I can’t figure out what it’s about, but hey isn’t that interpretation for you. It sounds like a bitter sweet love song tripping on mushrooms. Floating so high and watching ‘From Afar’. It’s a good track and well composed, follows on nicely from Hollow Walls.

Suddenly a change of pace though and we’re introduced into some dark heavy underwater feedback. We may have been floating before but now it feels like you’ve been dropped in the ocean. Collapse is the aftermath of the previous trip, the mushrooms have done their thing, you’re staring at the wall, it’s still moving and your head has dropped into the void of the deep blue.

The trip ends there though as White Walls smashes into existence. It’s a brutal change from the previous, a gothic style screamo track that’s a far cry from the mellow tracks we previously had. Electric guitar rips in with a pretty decent pounding on the drums to accompany it. The bass is heavy and the lyrics scream of oppression.

3000 Degrees follows on with the same tone as the previous track, gothic style vocals and dark heavy riffs, but with a twist of the dark and the light we’ve heard throughout the album. Before we would switch from a light hearted track to a dark and despairing one, but now we have everything combined in one. Smashing instrumentals to mellow acoustic, screamo vocals to soft mellow and the odd audio clip playback. It rolls and throws together nicely as a wicked anti-war piece (peace?).

Overall it’s a strange album. There’s some tracks I really enjoyed, such as From Afar and 3000 Degrees, it’s not the best produced thing you’ll ever hear but it’s got a certain charm to it that’ll keep you coming back. And hey, it’s free to download, so at least give it a shot.