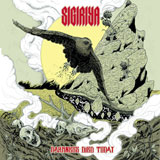 When 4/5 of Welsh stoner legends Acrimony reunited to form Sigiriya expectations were naturally high but the band were keen to prove themselves as an entity in their own right. Their debut album, ‘Return To Earth’ was more than enough to lay the ghosts of the past to rest and establish Sigiriya as a truly great band in their own right and stood as an exceptional testament to talents of the musicians involved. It came as quite a shock then to hear that vocalist Dorian Waters was bowing out of the band due to his personal circumstances just as the band were generating a strong head of steam. However, his replacement by local boy Matt Williams is possibly just the thing the band needed to truly establish their independence from their past and forge ahead as a powerful entity in their own right.

‘Return To Earth’ was always going to be a mightily hard act to follow as an album that seemed almost flawless but ‘Darkness Died Today’ is a worthy follow up. Stu O’Hara’s massive, stoner and Celtic inspired riffs power this album as they did previously with tremendous weight and gravitas. Not one for flashy over indulgence, O’Hara opts for a simplicity yet effectiveness as the guitars switch from epic to understated and subtle, from mighty and heavy to rocking and bluesy. Likewise the rhythm section of Paul Bidmead on bass and Darren Ivey on drums lock in with an almost psychic intensity that perfectly backs the grandiose nature of the music on offer. Musically this is possibly a more upbeat and, dare I say it, catchy collection of tunes than the debut, less complex and more direct without sacrificing the identity that the musical core of the band showed before.

Obviously much of the focus here will be on Matt Williams and how he stacks up against his predecessor. Waters may not have been the most technically adept vocalist but he certainly possessed a style that was his own and immediately identifiable and had a sense of melody that locked in perfectly with the music that backed him. Williams is an altogether different proposition. On balance Williams possesses a far stronger voice with far greater range and an irresistible smokey tone that most vocalists would kill for. His approach to the music is to instil it with a more soulful, bluesy style. This has turned Sigiriya into a very different beast that may have some listeners doing a double take to see if this is still the same band. Williams’ use of melody and harmonies gives the band a more commercial edge but is somehow less distinct than their previous efforts. On the one hand he gives the band greater flexibility and a stronger sense of melody but on the other hand they have lost a little of the unique character that they showed on their debut as the melodies seem a little more generic this time round having more in common with 90’s grunge like Soundgarden (albeit less histrionic!) or Phil Anselmo when he bothers to sing properly and not just growl at passers by like a pissed off dog! The effect is, in many ways similar to when Sabbath replaced Ozzy with Dio and, ultimately, they did produce one of the finest albums as a result!

Despite the initial jolt that such a drastic change in vocalist has brought to the character of the band, it has to be said that this is still an exceptional album from an exceptional band. It does take a few spins to become acquainted with the updated sound and to become used to the obvious differences but this does allow the songs a chance to bed in with the listener and reveal their strengths, of which there are many. There is no chance that these guys will ever be capable of putting out anything less than awesome music and ‘Darkness Died Today’ is certainly no exception…it may not have the immediate hit of their debut but is every bit as worthy. I suspect that, by the time this line-up has fully established themselves, album number 3 will be truly unstoppable.