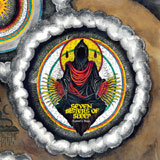 Get ready for an old school schooling in how new school extreme metal should be done the old school way. While you’re pondering that one, let’s also ponder why early 90s death metal (even doom metal a la Confessor) was so goddamn fantastic – remember when John and Donald Tardy (Obituary) were fresh faced, growling and hammering away on the seminal The End Complete or Bolt Thrower’s Warmaster was giving you one extended gut punt after another – the relative lack of pretense in this brand of primitive extremism was uniquely rewarding. Serpentine Path’s break on the scene gave us the best of two hypothetical worlds – that new/old beast was like reliving our 90s heyday with a modern perspective hip to the current divergent evolution of the genre.

L.A.’s Seven Sisters Of Sleep (SSOS) follows a similar but not identical path with 2016’s Ezekial’s Hags (Relapse Records) – one nod to the glory days but a firm eye on extreme metal’s future and all the blood thirsty possibilities that go along with it. The band members – Tim McClary (vocals, ex-The Arm and Sword of a Bastard God), Brian Thomas (drums, ex-The Arm and Sword of a Bastard God), Brock Elmore (guitars), Eddie Bermudez (guitars), and Hugh Blake (drums) – are no strangers to the scene (Elmore, Bermudez, and Blake also cover axe and bass for doom act Tafkata), their collective talents coming together in mid 2009 with the intent to sonically punish with a flagrant disregard for the consequences (i.e. to annihilate without giving a fuck). No complex medical tools for torture, no compulsive nob turning wizardry, no fanfare – just good ole fashioned blunt force riffing, with enough ear for (the right) melody and headiness to haunt. Sludge, black metal, doom metal, death metal – their sound defies classification, jumping, ducking and dodging the all too frequent lazy label or predictable blueprint. And while we’ve been stuck trying to crack their formula, they’ve cranked out two full lengths (including 2013’s awesome Opium Morals) and a horde of 7”s including a 2013 split with ILSA (Messiah And The Ivth Crusade), leaving our asses mangled in the wake.

The 11 track, 50 minute Ezekial’s Hags is yet another vicious statement in this band’s addictively toxic diatribe – Jones sets a ravenous framework, opening the album with a flurry of blast beat madness fraught with McClary’s rabid barks and growls; the song is more of a mood setter than anything else, grounding us firmly in the battlefield. Denounce downshifts to a slow motion collide, as a dirge heavy hypnotic chord strum builds to a brooding melodic finale. Despite SSOS’s deft handle on faster crust and blackened hardcore, their strength and buttered bread is in the slow grind – Gutter kicks off and ends with a series of head nodding moshers that make this song, along with Denounce, among the best – Plateau is another face melt at 1 rpm, and by the time the galloping Brother’s River and mid-tempo chugger Prey cross the finish line, you realize that a lot of the album’s stellar moments are in the first half. Although arguably front loaded, later tracks on the album like the ass kicking War Master and Sacred Prostitute, in its slick, dual driving atonal groove comes as close to ‘catchy’ as is reasonable for a band of spiritual brothers anchored in unapologetic nihilism.

You’ll definitely find yourself going back to this one, if only to revel in its surprisingly versatile sound and no frills appeal – it’s one of the cooler records to grace these ears this year and rounds out an increasingly chops heavy roster of Relapse releases over the past couple of years. Seven Sisters Of Sleep is a crusty black metal beast of a band, dragged through just enough chyme and sludge to emerge stronger, meaner, and more memorable. That’s a lethal MO.