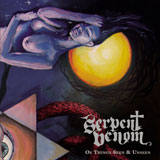 When I saw Serpent Venom had a second album out I jumped at the chance to review it. Being fortunate enough to see them live on their only gig in The Netherlands, I was immediately sold on their heavy Vitus meets Bedemon styled doom.

The new album opens with the monstrously heavy riffing of ‘The Penance You Pay’, the wailing voice of Gaz have improved quite a bit since their previous album and fits the traditional doom mongering perfectly. One can also hear that this is the first album where Roland Scriver (known to some of you from Sloth) has written some of the material.

Most songs come straight from rehearsal jams and they have this spontaneous, earthy feel to them that one only gets when not over writing or over polishing a song. It all flows naturally and nothing feels out of place.

‘Sorrow’s Bastard’ is a pure shot of neck bending doom. I find it hard to keep my head still, but head banging and typing simply don’t mix. I get a bit of a Cathedral vibe, of course with a strong shot of St. Vitus and Black Sabbath in the mix. The production is ridiculously heavy, no wonder because Chris Fielding (Electric Wizard, Conan, Capricorns etc.) is responsible for the mixing wizardry.

‘Death Throes At Dawn‘ starts off with a sorrowful riff that would even fit on a Warning album and the bludgeoning drums of Paul combined with the unearthly rumble of Nick’s bass drive you deeper and deeper into the mire. The vocal line here reminds me of such vocal genius as Goatsnake’s Pete Stahl. The even slower riff that follows also goes into Goatsnake territory. This song just keeps getting better and better, the riffs more and more doomed and heavy. A classic is born here people, so take heed of my words!

The opening of ‘Lord Of Life’ is quite a surprise. Trippy and psychedelic guitars set in and are reminiscent of Planet Caravan. But the trip is soon diverted and from space we fall back into the murky swamp from whence we came. Dirty hooks and deadly riffs grab us and crush us with their sheer weight. After a while the trippy goodness returns for a bit, and even some spaced out guitars are played, but in the end we get smashed back down in the mud yet again. Who said this was going to be a fun ride?

‘I Awake’ is a short acoustic interlude, giving us some respite, before the bastards beats us down with even heavier riffage. ‘Let Them Starve’ is a relentless bit of traditional, slow pummeling that would make Candlemass shit their pants. This is just perfect in every way, from the slow riffs in the beginning to the up-tempo heavy metal riffing that leads us out.

Next up is a mammoth of a track. The nine minute long dirge called ‘Pilgrims Of The Sun’ opens in a slow crawl, befitting early Reverend Bizarre. Yes it’s THAT slow. Only after four minutes, a new riff comes in that is slightly less slow, but also slightly heavier. Nasty guitar leads make the whole even more abrasive and leaden. Nowhere does the tempo pick up and nowhere does hope shine through. Excellent track.

The album closes off with ‘Burning Free’, a lesson in how to write the most insanely heavy doom riffs in the world. Christ on an armadillo, this is heavy! Somewhere half way another great, slightly faster riff sets in, Nick Davies having a small spotlight moment here. Holy fuckstickles what a riff. It has that same testosterone fuelled drive as High on Fire’s ‘Ten Thousand Years’.

The album fades out with some vintage synth wizardry and there we have it. An absolute must have for anyone into traditional doom. And also those into other doom. And those into metal. And just everyone with any musical taste whatsoever!