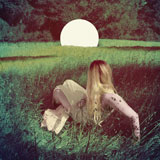 Seattle doom newcomers Serial Hawk recently signed to Bleeding Light Records to release Searching for Light, their debut full length record. The three piece have developed quite the reputation for their devastating, wall of sound live shows and their swelling cascades of riffs are a pleasure to hear.

Opener Desolate builds gracefully, layering riff upon riff with a rumbling patience, waiting for that key moment to unleash the torrent. Vocalist Will Bassin has got that great, primal roar that echoes above the swelling riff, as tribal drumming builds the anticipation for the payoff. There is more than a whiff of classic Isis here, but it isn’t derogatory to the band’s efforts. Their shadow looms long over Serial Hawk, but the tectonic crash of guitar is far more hypnotic and primal than Isis ever were.

Lying In Wait is a more straight forward, almost Unsane-like noise rock track that is far more immediate in its delivery. The repetitiveness worms its way into your mind and plants itself there; a seed for the cultivation. Of Decay nurtures it with waves of rolling guitar and thunderous drumming. Of Decay also produces the first proper moments of calm that manifests itself as breathing space, before the riffs flow back on top. Serial Hawk create this almost droning wall of sound effect, but keep it interesting so you never get truly lost in it.

The eighteen minute closing epic title track contains, in a microcosm, all that is truly great about what Serial Hawk do. It begins with what sounds like wind, rushing across a vast, featureless plain. Slowly notes begin to drift from the fog, eerie and faint before the drums begin. The track branches out into hypnotic, almost desert rock like riffs that drift off into the night, before settling into calm. Suddenly, riffs stab down into the peace, and in true Neurosian fashion, the riff becomes the centrepiece once more. Searching For Light is one of those songs that takes repeated listens to truly appreciate, but only one to understand its quality.

Serial Hawk are a band to watch out for. Searching For Light is a remarkably sure and mature record for a debut, each track crafted with care to ensure each riff, each roar and each beat is milked of its potential. An avalanche of primal metal will meet you when you put this record on, and you’ll have no choice but to let it sweep you away.