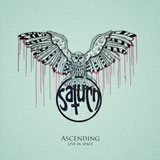 The amount of rock bands in Sweden taking their influences from the olde and doing something great with it is now fittingly astronomical. The latest one to be snapped up by the largely reliable Rise Above Records are Saturn, who are still taking one small step in to their career with their debut Ascending (Live in Space).

With their stereotypical band name and links to their new label, it is easy to get an impression of the band as your average ‘stoner’ rock dropouts which is far from the truth. In fact, the band are very hard to pin down with moments of the expected UFO worship alongside riffs that would be welcome by fans of early heavy metal and even, at times, thrash.

This variance makes Ascending (Live in Space) a really interesting prospect and also proves incredibly refreshing compared to many other bands they will likely be pigeon holed with. Everything from the unpredictable riffing of Over The Influence to the acoustic outro song of Moonstone shows a band that are willing to think outside the box and not fall into any particular niche.

Of course, this doesn’t mean to say that the Saturn are a completely new sound and many bluesy riffs not too far from fellow Countrymen Graveyard make their way through their debut. Tower Of Terror not only has a fantastic title but is good evidence that the band do have something for those looking for their next Blues Bills with a hefty collection of psych also in their sound.

The band are lead by vocalist and guitarist Oscar Pehrson who has created an interesting sound to spearhead their music.  Having a voice which is strongly influenced by the hard rock greats from the 70s is of course nothing new but Oscar’s confident vocal swagger coupled with his more than competent guitar skills create a great leader for the band.

The first promotional song Saturn have released is also their album opener and So, You Have Chosen Death is certain to make an impact with its instant catchiness. Unfortunately, in context with the rest of the album this is actually the band’s weakest song and although short and sweet does not show off the power of the band’s song writing skills.

With song titles such as this and Leadersheep it is evident that a tongue in cheek attitude is as necessary to the band’s DNA as their love for early rock. This sense of not taking things too seriously is backed up by their musical skills and youthful energy being convincing enough to make these moments all the more enjoyable.

Far too many bands are carbon copies of what has happened in the past. Saturn, although not truly ground-breaking, have created something that is a lot more welcoming than the next Led Zeppelin imitators.