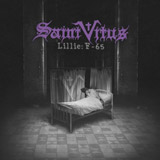 As heavy metal evolves and its various faces are subverted, rehashed and cross-bred, it is almost inevitable that the originators of its various genres should attempt a return to the frontline as their influence is hailed. The last decade is littered with comebacks, some more successful than others, but at no point is the danger so great as when bands decide to record new music. It’s a very different matter recording fresh material as opposed to blasting out the songs that broke such ground two decades or more ago. Some bands succeed by evolving (Autopsy being the most obvious example), but others just carry on where they left off because it’s what they’re good at and it’s all they want to do. This new album from the legendary Saint Vitus sits firmly in the latter camp, and it gives me great pleasure to report that the quartet lack none of the fury that made their previous recorded output so timeless. In all fairness, we were given pretty promising signs on their second full post-reunion tour, where they first played one of their newly composed songs – the great thing is that the rest of the album is just as brilliant as the initial taster was, not for a moment does it feel forced or tired. Far from pissing on their own legacy, Chandler & Co. have enhanced it, with an album that sounds fresh and modern (courtesy of Stone Axe frontman and co-producer/engineer Tony Reed), but unmistakably VITUS.

From the very start, there is no messing about, one bar of new drummer Henry Vasquez’s V-beat (hail the much-lamented Armando Acosta!), and opener “Let Them Fall” is in full throttle! Adams and Chandler assault our ears with a rolling, relentless pummeling of pure RIFFS, as Wino (the most pissed off he’s sounded in years) growls out Chandler’s unique lyrics that speak to anyone who’s ever been downtrodden or mistreated by society: “Why do I scream at them/They never listen/Why do I beat my head/Against the wall”. This is one of the main elements that has made Vitus appeal to so many people; the connection with subject matter that fucks with us all at some point in our lives, whether it’s being mocked for the way we look or just plain old depression. Bar the excellently layered production, this could easily have been a track off “Born Too Late” – but part of the genius of what Tony Reed has done with this album is to leave Chandler’s sound intact, and as with much of their old output, the rhythm guitars aren’t heavily layered (a very contemporary habit that doesn’t always fit), and two minutes into this song, they drop to nothing, allowing Chandler’s batshit crazy solo to speak for itself!

From this stunning opener, which is sure to become a firm favourite on future tours, “Bleeding Ground” continues the midpaced dirge, with a groove (we need to reclaim this word as a positive adjective in metal!) that is guaranteed to get your head bobbing, Wino reining in his rage in favour of the soul for which he is equally renowned. It is poignant that this song is a lament for the environment at the hands of greedy powermongers (anyone remember “Trail of Pestilence”?) – after all, Chandler lives in New Orleans, and experienced firsthand the devastation of hurricane Katrina and the incompetence of the country’s politicians in helping the needy. This song is also notable for having the nearest thing to a “straight” solo on the album, but Chandler being the unique guitarist that he is, twists it into his uniquely atonal style that is instantly recognizable. Furthermore, just as you think the song has proved itself, it takes another turn around the four minute mark with a sudden increase in pace, as the band remind us of their punk side! The spirit of “Hallow’s Victim” has not been forgotten!!

The one piece of music on the album from the pen of Wino (and also the sole track to feature him on guitar), “Vertigo”, is easily recognizable as the work of the erstwhile Obsessed frontman, with its melancholy, faintly psychedelic overtones, as Mark Adams’s huge bass (probably the best treatment on record he’s ever received, great to hear him not being lost in the mix!) lets loose a monotonous dirge. Incidentally, this album marks the first time Chandler has played acoustic guitar on record, since the only other acoustic Vitus track, “When Emotion Dies” (a highly underrated song), saw guitar duties being handled by Wino. A welcome, calming lament before the storm, in the best tradition of Sabbath.

“Blessed Knight” was the track that was offered to the fans as a taster on tour several years back, and it’s an absolute corker! It has the same blown-out May Blitz channeled through early Motörhead vibe that made the last Electric Wizard such a rewarding experience for me – after all, Chandler and Adams grew up absorbing the 70s rock that laid the foundations for everything we love today. Lyrically less “earth bound”, it comes as no surprise that the lyrics on this song are Wino’s, taking in space and mysticism, and it’s to the band’s credit that these subtle variations permeate the album, as the song flows beautifully into one of the slowest tracks on the album “The Waste Of Time”, with its deceptively simple riff (school of Iommi, lesson one) and churning relentlessness that made me want to doom-dance like Messiah in his prime!

For “Dependence” (there isn’t a single song on this album that isn’t a downer! This is REAL doom metal), we are treated to another acoustic interlude courtesy of Dave Chandler; this mellow introduction gives an element of psychedelic depth by way of background effects, used subtly and unobtrusively, before the band’s trademark no-mids-or treble (see The Obelisk’s fascinating interview with Reed about the recording of the album) facemelting riffs kick into a devastatingly depressing song about addiction. The song grinds to a halt for a suitably stomach-churning feedback solo in the middle before returning to the main riff (a trick they’ve used live for decades on one of my personal favourite tracks, “The Troll”), before a final scream of “I DEPENDED ON YOU”, which I reckon sounds like it was delivered by Chandler… And as if that wasn’t enough, the final track “Withdrawal” is a brilliant 3 minute testament to “Chandling” (thanks, Stig!), that trademark acid-flashback nightmare mix of wah and feedback that only DC VITUS can summon up. An absolutely perfect ending to an album that flows beautifully.

The DVD that comes with the first pressing is an enjoyable affair that captures them on fine form in Germany in 2010, and contains some interesting (if brief) interview footage of the band and their road crew (past and present). The artwork, however, is undeniably mediocre – even Hellhound at their shoddiest didn’t put out something this bland, but it’s a minor quibble, as the musical content is perfect from beginning to end. Clocking in at just over half an hour, there is absolutely no filler to be heard anywhere on this album, and as such, “Lillie F-65” is guaranteed to top many “best of” lists when the year is at its end. The sound, lyrics, delivery and riffs are all in keeping with the high standards fans expect of this much imitated, but never equaled band – Vitus aren’t just back; they’re still better than anyone.