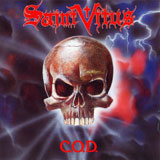 One of the major benefits of a band’s discography getting re-appraised in their twilight years, is that neglected albums get given a second chance to shine. Season Of Mist have given you and I, dear reader, the chance to have another crack at the much-maligned SAINT VITUS album, “C.O.D.” Originally released on Hellhound in 1992 to a pretty universal drubbing, from both fans and critics alike* (well, the latter’s hardly surprising…), it found the trademark Vitus sound transported into a somewhat uncomfortable sonic universe, with the label enlisting Don Dokken to produce. We can only speculate what the hell (no pun intended) the label were thinking when assigning production duties, as the band (rightly) didn’t change their songwriting style to fit Dokken’s thin and rather washed-out sonic palette. Stranger still, the label also nixed the band’s original choice of singer – at this point, Wino had left to front a re-animated lineup of The Obsessed, and with Reagers also out of the picture, the band had picked an unknown from America. Hellhound insisted on the pipes of Christian Linderson, of Count Raven fame, presumably because they figured it would boost album sales. As fate would have it, their selection of vocalist was far from disastrous, and ended up saving what could otherwise have been a real wasted opportunity, since the songs are unmistakably Vitus! Unkind things have been said about Children Of Doom, but once your ears acclimatize to the very different sound of this album, it becomes clear that it is, in fact, a very enjoyable piece of work.

The album begins in standard heavy metal fashion – i.e. thunderbolts and chanting – so far, so doom… Then Chandler’s guitars kick in, along with his trademark acid-fried wah solo, sounding less beefy than usual (despite the fantastic remastering job), but when the drums start, the mark of Dokken is unmistakable – the V-beat has been well and truly castrated in comparison to the muffled but heavy and natural sound of their SST albums. Once the initial shock of hearing Vitus mixed like a power metal band has subsided though, you’d have to be made of stone not to sing along: “We are the children of doom… Give us some room!” As bands from Cirith Ungol to Manowar have taught us, there’s nothing like a good singalong in the world of heavy metal! Good songwriting prevails even through a watered-down sound – after all, who would argue those classic Venom albums sound “good” in the conventional sense?

There are no other shocks to speak of in the album from this point on, and in fact the different sound even starts to have a certain charm, and there is the usual sense of lugubrious fate that hangs over the album. The one song on the album that isn’t a uniquely Chandler composition, “Planet Of Judgement” does not mark the first time Vitus have penned a diatribe against ecological warfare. It’s back with beasts of the night for the uptempo “Shadow of a Skeleton”, all Acosta fills and huge, monolithic riffs. A standout track for sure, with an utterly fantastic mid-section where Chandler even slips in a few twin harmonies! Little touches like this are what make this album such a rewarding experience – it’s so clearly Vitus, but there is a real attempt to do something different in the confines of the studio (the one live recording I’ve heard from this era sounds far more like the Vitus we know and love, which in a way makes this odd album even more endearing).

More creeping beasties on “I am the Screaming Banshee”, a punkier number that screams “REAGERS”. Chritus seems far more in his comfort zone with the slower numbers, or maybe I just associate Vitus’s punk side too much with Reagers (I still don’t think Wino‘s version of “White Stallions” is anywhere near as good as the Reagers original). Therefore, on ultra-slow crawlers like “The Plague Of Man”, Lindersson’s Ozzy-indebted drawl is completely in its element. Reagers is the Halford Horror Show, Wino is the Soul, and Chritus is the Ozzy – I can live with that!

The next track “Imagination Man” is another highlight of the album, a song that actually dates from 1979, when the band were still called Tyrant, a tale of swords and sorcery that probably means something entirely different – it hardly matters, it’s a total banger, although definitely upstaged by the one track on the album for which a video was made, “Fear”. The whole band are on top form for this track, Chritus’s vocals sounding particularly evil, with a great singalong chorus to boot (and even a slight return of the twin harmony!). Here, the hard-to-find original LP version ended – I was the subject of much derision for refusing to even accept its existence years ago, but I digress… It’s tempting to speculate that the label cut the album here for the LP because the original CD ends with a (vastly inferior) re-imagining of “Hallow’s Victim”, but the honest truth is they were probably just being cheap, especially since “Bela” is one of the best tracks on the album, definitely the song closest in spirit to the second side of the first SST LP. Chandler handles vocal duties for “A Timeless Tale”, a sort of spoken word piece that ventures into nightmare territory straight out of an EC horror comic!

The real treats for Vitus fans are the two bonus tracks tagged on the end of this release, “To Breed a Soldier”** and “The Chameleon”, demos originally recorded for Nuclear Blast America just after the C.O.D. sessions and subsequently rejected because said label wanted something “…more Vitus sounding…” (Eh?). Both tracks leaked onto the internet in the last few years, but they (along with the rest of this album) have been given a very welcome scrubbing up for this reissue! The irony is that they’re actually two of the best songs of Chritus era Vitus, which makes their rarity even more perplexing, given also that his voice never sounded better than on these two tracks. The former song really stands out as a perfect combination of mournful vocals and rolling riffs.

Final verdict? Yes, overall it’s the lesser of the vintage Vitus albums; it’s undeniable that it will never quite hold its own against “Die Healing” or “Hallow’s Victim”, but then few albums do, metal or otherwise. The fact is, despite an initially disorientating overall sound, this is still unmistakably Saint Vitus. All the riffs, doom and substance that make the rest of their discography great are here in spades, and it’s actually an album that sticks in your head because it’s so different to the others – it has its own identity, and it rocks in its own right (and one of the coolest metal skulls ever for artwork!). A welcome sonic upgrade, although I think I’ll still keep my cassette version for posterity! Now, altogether: “WE ARE THE CHILDREN OF DOOM!”

*Not to mention Dave Chandler, who sadly still seems to think the album stinks to high heaven!

**Metal Archives originally had this listed as “To Be A Soldier”, I presume Season Of Mist’s press notes are correct…