Hot Graves are a four-piece from Gainesville, Florida and consist of M. Colby on Guitar / Vocals, J. Stewart on Vocals, T. Hutchens on Bass and J. Mamo on Drums. Gainesville immediately brought to mind goofy Ska-Punk outfit Less Than Jake and them aside, has also been responsible for the likes of Tom Petty, Against Me!, Asshole Parade, Charles Bradley and Hot Water Music.

I’m amazed how Metal could thrive in Florida with palm trees, sunshine and all the other dreary associations that go with it. It’s even more amazing that Hot Graves originate from there with their less than sunny sound. You can imagine them originating from the rough and ready streets of New York but the sunshine state?

The band formed in 2008 and play an amalgamation of D-Beat style Hardcore, Death and Black Metal. There are two releases to review here, the first is Haunted Graves which has an official release date of 28th February. It is a 4-track EP and man does it rip!! The vocals range from Hardcore shouts to blood curdling Black Metal shrieks. Being an EP, it is always going to be relatively short anyway but the speed and intensity that the band play at means that it’s over with even quicker. The technicality of the drumming reminds me of vintage Cattle Decapitation in places and Dark Throne in others. The artwork certainly has a DIY feel to it, a simple drawing of three Grim Reaper type figures standing adjacent to one another standing in front of corpses. It’s certainly unpretentious and with a veritably unreadable band name demonstrates that this is without a shadow of a doubt an extreme Metal band.

I would definitely recommend these 2 releases if what you’re looking for is Metal that is raw, unpretentious and fun as hell!

Accompanying this release is a reissue of the band’s most recent full-length debut, 2015’s Magnificent Death which had never to date been released in any other format other than cassette. This itself was a follow-up to 2011 debut Knights In White Phosphorus. The album art once again is simplistic; a muscular torso figure with a skull head holding up what I assume is the head of Satan? This is pure speculation on my part.

Opening track Witch Hammerspell starts at a medium pace with some quite thrashy riffs before launching into the band’s signature Blackened D-Beat sound at around the 1:30 mark. As the album progresses, I notice a Thrash influence becoming a little more prevalent and more in common with a group such as Power Trip, albeit with a dirtier sound, not a million miles way from Bathory’s Thrash influenced output circa the mid 90’s when they took a break away from their then developing Viking Metal sound.

Jeweled Teeth helps to bring back the blastbeats reminding me of the opening track. Dead Wizard Mountain, I mean you couldn’t have a better track title than that, ups the Black Metal influence again with some amazing blastbeat drumming and is possibly my favourite track on the record. Our Cavalry (In The Night) closes the record and is the longest track at just over five minutes and concludes the album in epic fashion.

In conclusion I would have to be honest and say I prefer Haunted Graves, it feels more intense and uncompromising and while I did enjoy Magnificent Death, I found the thrashier elements dragged the album at times and subsequently my attention wandered. That said I would definitely recommend these 2 releases if what you’re looking for is Metal that is raw, unpretentious and fun as hell! 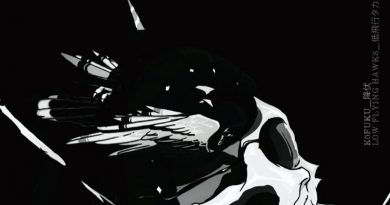