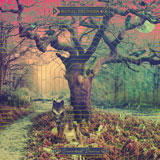 Three years ago, when they released their debut album, the critically acclaimed CVI, Royal Thunder were hailed as one of the most exciting up-and-coming bands of this generation, because they did not fit into any particular category: Metal? Soul? Blues? More like all the above blended together to create a unique sound that was contemporary and not overly retro. Now, in 2015, after one EP released in 2013, they are back and a lot has happened since then.

Vocalist/bassist Mlny Parsonz broke away from a Christian cult and, on top of that, she and guitarist Josh Weaver, who used to be a couple, are now separated. Conceptually, Crooked Doors is an emotionally intense album where both members of the relationship were involved in the creative process. However, there is also a feeling of hope and unity, because, as Mlny recently explained in an interview, “We were meant to play music together. I am married to this band, and this is my destiny”.

The tone of the album is somber but somewhat hopeful – a hard-fought battle to rise above sadness and not be trapped in an endless sea of desolation .The lyrics deal with feelings of loss, regret and sorrow, and one can tell the process was undoubtedly painful.

Musically, a lot of the elements that made CVI so special are still there. For example, Mlny Parsonz continues to have a powerful, soulful and wonderful voice. She clearly sings her heart out and puts tremendous passion into her work, as if her life depended on it, which makes the listening experience so much more compelling. This is also one of those albums where every song is appealing. There are power ballads, such as Forgive Me, Karma or Ear On The Fool, but the heavier roots have not been forgotten and can still be heard on Forget You, for instance.

Another great song that deserves to be mentioned is Wake Up, where Parsonz desperately tells us that she needs to wake up and that she is just wasting her time and life. That hopeless and dark atmosphere is felt throughout the entire record, especially on The Bear-a two-part closer where Mlny really vents her frustration and where Royal Thunder successfully create a lovely melodic tune , using  piano and cello to emphasise the delicate and vulnerable side of their musical nature. It’s nearly impossible not to get emotional when listening to this beautiful piece of art, especially when Parsonz confesses that she wishes she had the heart to move on- but she doesn’t, because, according to her, she is not that strong. An honest, heartfelt tale of a hard period in the life of a sensitive and talented woman.

Josh also deserves a lot of credit for his amazing guitar work, full of bluesy solos that, in a way, are almost the musical equivalent of the poetic lyrics sung by his former fiancée. A much more introspective work than their 2012 studio effort, and a true masterpiece – one of the best albums of 2015.