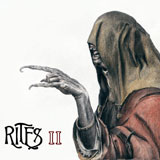 Frequenters of this site will know that Ireland has been punching above its weight this year. While the Emerald Isle may not exactly be synonymous with quality metal offerings, a steady stream of fresh and exciting new material has been pouring out into the Irish Sea and diffusing across to our shores. Rites new release – marked simply with the numeral ‘II‘ – is next in line to follow this encouraging trend.

Hailing from Galway, Rites are pretty much the bread and butter of fans of straight-up, old-school doom. A first listen conjures images of Sabbath, Zeppelin and Iron Claw, but mixed in with a seriously heavy streak. These guys aren’t recreating the sounds of their forebears, nor taking the plunge into all-out metal, but walking a narrow line between the two. This is a hard thing to do: many have tried and failed, either coming off too heavy to some ears or too weak to others. Identity crisis is an all-too-real danger with such records, but Rites have – for my money – struck the balance about as perfectly as it can be struck. Opener ‘Threatened Shelter’ hits all the right, sludgy notes with its droning, distorted chordal intro, before throwing you into the kind of swinging-balls-out heavy rock riffs that can’t help but get the blood pumping. High-art this ain’t, but the visceral nature of the album will hook you and not let go any time soon.

Even Kieran Griffin’s vocals follow this somewhat hybrid philosophy, coming out gruff and distorted, but never descending to outright growling territory. Again, this fits the music in a way that a stark aim for either end of the spectrum never could, and while it’s unlikely he will be mentioned in the same breath as some of rock and metal’s most unique singers, I would be hard-pushed to argue that he shouldn’t be.

All the genre navel-gazing aside, however, most people will know what to expect from an album like this: fuzzy distortion, stomping, heavy riffs and a pace that flows from fairly rapid down to outright glacial. What you might not be expecting is the kind of melodic nous Rites occasionally display. The harmonised solo on ‘Quarry’ is as awesome as it is simple, providing the perfect counter-point to the slow, down-beat riffs that have gone before. The band never linger in one state or theme long enough for you to get bored, and the music surges onwards whether you want it to or not.

If you’re looking to round out what has – I think you’ll agree – been a pretty fantastic year for music, you could do a lot worse than picking this up. And at the highly reasonable price of absolutely free, I see no reason we can’t drum up the demand for the Irish to raid our shores sometime in the New Year.