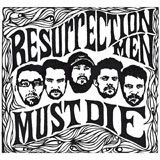 It’s a curious title that Resurrection Men have sprung upon us for this, their debut release which was splurged out of The Moonbase Recording Studio at the arse end of 2014. On the one hand, it could be condemning the re-re-re-release of the “retro” hash-tagged acts of now-eryear, or a belittlement of the inability of today’s modern rock scene to move on and be, errr, more modern. Equally, it could be a sign that such a scene is fading, and that it is indeed always doomed to fade as time marches wearily on. Perhaps it could be a mockery of those who once declared that rock’s end is nigh, soon to be replaced by hip n’ dub or djent n’ bassbeatz or some other ridiculous shit. Or it could just be a stab in the dark at a semi-dynamic, edgy album title that actually means nothing. Either way, having discovered this band in a local bar in my (and their) hometown of Coventry last year supporting the sublime Californians Dead Meadow, I can confirm that not only did Resurrection Men hold their own on that particular night (review here) but that Resurrection Men Must Die! is a confident debut that will lift your spirits away from the mire that the dusty stack of sludgy, post-rock albums lying on your stereo speakers has likely already summoned.

A curiously mostly-instrumental opener, apart from its closing assertion that “This Guy’s Played Milan”, the song named after that same observation is a clustermindfuckfield of stark indie stylistics, adeptly metallic sweep-picking, jazzy galloping breakdowns and funk-laden percussion. The guitar work of founder member Jon ‘Parge’ Pargetor and Andy Whitehead is sometimes shrill and sometimes overly bouncy, but there’s a charm about the Resurrection Men and their severe lack of shits given about what anyone will think about them and their sound that’s weirdly addictive. Similarly, Make It Home sounds like an off cut from a Desert Sessions jam; garbled vocals from Brendan Casey’s frenetically punky mouth slam into Alex Miles’ thick bass tones to end up coming surprisingly close to a Big Business-esque tune, minus the low-end rumble.

As the thoroughly odd She’s The Device kicks in with its grungy, Mudhoney-meets-Pixies bravado, yet accompanied by some bizarre funky grooves that recall a head-on collision between The Specials and Primus (…seriously), its soon apparent that whilst Resurrection Men’s sound is full and strident, it’s also not genre-ifiable in the slightest. Casey’s vocals are an eerily common tongue, yet they sound mysterious, sinister and uncompromising all at the same time; a little like Arctic Monkey’s Alex Turner trying his hand at some of Steve Albini’s lyrics.

Tears Of Wizard’s Funeral carries a doomier underbelly to an otherwise stoner aesthetic. Keeping Casey’s vocals out of the blend for the most part, there are nods to Witchcraft and Lord Vicar in here, despite the song relinquishing anything in the way of true HEAVY in order to ride ‘the brood’ a little harder than the other …Must Die! tunes. It’s a long and complex arrangement, but the solos remain sweet and sincere whilst former Cathedral drummer Ben Mochrie maintains his song structures admirably and confidently whilst adding a finesse and a slight of hand all of his own with some delicate fills throughout.

Carpentry hits a widdley guitar-driven atmosphere that fans of Russian Circles will enjoy before exploding into a sun-worshiping slab of post-metal. It’s simply not to be for the duration though and Parge and Whitehead’s guitars are soon back to resume their picking away along behind Miles’ virtually randomly placed headstones of doomy bass guitar.

What’s that? Eager for some sanity and a modern, upbeat take on where grunge could have ended up in 2014? Well, (Fight For It) Now is here to provide that soundtrack, coming across like Nirvana and Franz Ferdinand growing some balls, manning the fuck up, chugging some lagers and doing a Blue Öyster Cult cover in the style of Buzzcocks. If that makes no sense whatsoever, then let it be known that this number, alongside partner track Roll Up, is the only radio-friendly unit shifter that sounds like an actual pop song on …Must Die! With both tracks fading out into triumphant finales of Casey’ boisterous vocal swagger and Parge/Whitehead’s punchy Fatso Jetson-y riffs, it’s hard to let this music let you feel down in the dumps at any stage.

Closer Forty Days is a return to the desert-swept weirdness of the earlier stages of the album. Vocals are conspicuously absent in favour of jazzily drummed pitter-patter and twang-laden guitar chimes that sound off a Yawning Men recollection. It’s a sleepy setting of the sun that oddly brings me right back to a Dead Meadow fade-out, who interestingly were the headline act at the gig where I initially found the Resurrection Men in the first place.

This is not a perfect debut and it’s certainly not for everyone. Somehow meshing indie, grunge, desert rock, jazz, funk, pop and folk into one sound is a bold ambition, but Resurrection Men for me have cracked it more than they’ve scuffed it. Perhaps …Must Die! is a little too busy and random for its own good at times and perhaps it could do with more vocals to ground the songs in some more substance and meaning. But yet, it’s comforting to know that although the direction the band is heading in is unclear generally, it’s a harmless and cheerful tone that greets you at every turn in the road. “Doing this keeps us out of trouble” reads the band’s Facebook page and here’s to hoping that Resurrection Men keep out of mischief and their deathbeds for some time to come.