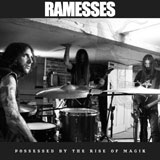 Controversy in a goat skull. This has been one tough motherfucker of an album to review. I’m all dried up man. The recently prolific Ramesses score high on originality with this remarkable new album that on first listen (and indeed maybe on twelfth listen too) strikes you as one weird gamble on the vocals. I backed away with a puzzled spasm erupting in my brain. Adam Richardson (he of the fabulously red-raw voice which can also hold a belting tune) is singing, nay, warbling, in a manner redolent of a vocalist from ANOTHER GENRE OF MUSIC THAT ISN’T METAL!!! Get your head around that, doomhound. I couldn’t at first, so I listened again, then again, and so on. It started to become clear that Ramesses had taken a brave move that on closer inspection may yield a degree of reward for certain patient listeners. They have largely abandoned the deep and throaty metal vocals of yore and chosen a new direction that may have many Ramesses fans scratching their heads like addled apes. I think I am one of those apes.

The first track, ‘Invisible Ritual’, is a rude introduction to the new Ramesses. Yes, we have the fine trademark doom-laden and mud-thick riffing of Tim Bagshaw and brute percussion of Mark Greening, but we also have Adam’s new singing style that bears no resemblance to any of his previous vocal patterns. Over the chorus he stretches and strains a distinctly more emasculated voice that reminds me at times of Mike Patton in his less operatic moments mutating into a quasi-Ian Curtis moan of sensitivity and angst. All in all this is a stomping Ramesses brutaliser that is downright marred for me by the vocals on the chorus.

‘Towers of Silence’ is another stupendously ominous monolith of macabre metal that is needlessly compromised by Adam’s Emo Philips-style singing. In fact I really wish they would re-record some of the vocal parts. He simply sounds nasal and whiney – it doesn’t do the music any fucking justice whatsoever. At this point I’m thinking WHY OH WHY? ‘Sol Nocivo’ which rescues my dismay, opens with air raid sirens and then develops into an impressively brooding neo-gothic dirge of epic proportions. Adam is on fine form here, utilising his gruff and deep voice of yester year. ‘Plague Beak’ is another mighty and portentous tri-tone soaked rumbler, the like of which Ramesses do so bloody well. Check out the huge doomfucked opening bars, conjuring up vivid visions of dread Cthulhu itself rising out of the deep ocean mists. Mark maintains a steady sub-military beat on the snare and Tim’s lavish guitar is leering all over the song, snaking and coiling like a hungry alien penis. Adam intones spoken word, which works exceedingly well in reinforcing a grimly dark atmosphere. Both of these tracks are weighty and powerful beasts which will go some way to satisfying the Ramesses craving out there.

‘Duel’ is a belter too, and somehow Adam’s singing style works well on this occasion – not too overdone, and interspersed with a hoarse screaming. There is definitely a 1980s post-punk/proto-goth vibe going on with this album, as evidenced by both this track and the next, ‘Safety in Numbness’. The opening bars sound very much like The Cure circa ’17 Seconds’ and early Joy Division, that is until the big overdriven chords kick in and devastate. Both tracks illustrate a reasonable concession to change in direction without sacrificing too much of what essentially makes Ramesses so cool.

On the title track, which closes the album, Adam sounds a bit like Pete Murphy out of Bauhaus (not a bad thing) and a bit like someone in a sixth form band that plays jangly Smiths influenced pop. The thing is I don’t want Ramesses to sound all fucking sensitive and emotional and gothic. I do not want them to sit in a graveyard and write sixth form poetry for alabaster skinned girls with dyed black hair that clashes with ginger eyelashes. I want them to steam in and destroy tower blocks and shit out giant iron missiles with their shock-horror King Kong mega-metal. For me this last twelve minute track really misses the mark, particularly when Adam feebly opines how he is ‘falling down’ over and over again. Too many times within fifty minutes I am reminded of bland and floppy fringed indie bands in the 1990s. I implore thee – grunt and roar and scream like you used to.

So, after repeated listening, what is the verdict? Love the music. As ever, Ramesses write stunning and atmospheric doom metal. The new vocal style is a disappointment for me (no shit – what a sudden curveball). The abandonment of the traditional throaty metal vocals on many of the tracks (though not all, I add with relief) leaves the fabulously doom-drenched music lacking dynamism and tension – two integral mainstays of the Ramesses sound. To be blunt, at too many points on this new album, Ramesses simply sound like they’ve had their bollocks cut off. Because of the ill-conceived new vocal direction, on a good half of the album, the songs come over as fey, melancholic and compromised as opposed to powerful, strident and evil, as they have always done previously. The increasingly subtle and quasi-gothic approach of Ramesses’s song writing needs to be offset by the brutality of Adam’s rip-snorting guttural vocals; otherwise they are in danger of alienating a legion of fans who love extreme music.

A second niggling gripe for me is that the production is not as bold or as heavy as on previous outings, such as ‘Take The Curse’ and ‘Misanthropic Alchemy’. It feels like all the instruments are somehow buried in the mix, which is low and murky, and are struggling to emerge with any real attack. Having said that, it still fundamentally works, lending a strange and ‘cheap’ lo-fi quality that adds to the eerie ambience of the song structures instead of lessening their impact.

All that remains to be said is that this new opus deserves your attention – some of you will undoubtedly dislike, even hate, Adam’s new skewed vocals. I certainly have a bug up my ass about them, and I make no apology for this. For me, this is a missed chance. This could have been a superb album. However, the more broad-minded amongst you will realise that Ramesses have made a clear move towards artistic expression that seeks to escape from the often claustrophobic confines of the standard metal paradigm, even if it doesn’t completely pay off. You decide – a misguided and flawed vocal experiment or a brave triumph of creativity? You know what; I’m still not quite sure myself… 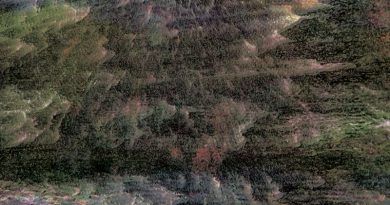