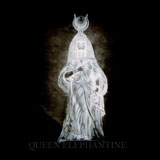 Stoner droner mystics Queen Elephantine, the oft travelling Lords of (sonic) Lethargy, have produced yet another striking opus of snaking whirring trip rock (that isn’t actually ‘rock’) that hums and glides through your addled brain like the dawning realisation that you are imprisoned in a cage of your own creation, from whence only you can free yourself. Garbled psuedo Buddhist ramblings aside, this is a new downloadable e-release (check their myspace page for details), recently mastered by Billy Anderson and waiting for a record label, that represents that exquisitely soporific QE sound, but dwelling in a more meditative dimension than the grand altered-state rock of previous album ‘Surya’.

What is immediately noticeable is the emphasis on the vocals. The wailing chants of opener “Search for the Deathless State” blend into the overall miasma of huge Earth-esque drone guitar, cymbal splashes and tabla flurries, which creates an expansive and sprawling sonic haze that rises like a deathbed mirage to envelop your nodding head and consequently dissolves your sense of ego in a hot sea of languid tranquillity. Raj intones a fantastic piece of prose that beckons the closing of this monumental first track. In the hands of many musicians such a device would run a risk of sounding pretentious, but this man carries a vision and a conviction born of personal experience.

“Gloaming” takes the Indian subcontinental influences even further with buzzing sitar drone, scattered tablas and vocals that bend and warp around one note like a bumble bee tied to a nail plunged into a table. The line “They’re keeping me from me” (read what you will into it) is repeated over and over again as the track reaches its end. A short interlude of what sounds like a genuine sample of monks chanting in a temple gives way to the slow rising and eerie demon tainted soundscape of “The Vulture and the Creed”, which along with the following track, “Priest”, conjures up memories of very early Sonic Youth, Swans and the whole New York ‘No Wave’ scene. There is an experimental sparseness here and economy of sound that QE are only just beginning to explore, much to their artistic satisfaction. Perfect soundtrack music.

I suspect many lovers of the orthodox ‘rock format’ will tire of the meandering nature of this album quite quickly, but those of you with a yearning towards the more experimental may lap this up for what it is, a fascinating collection of pieces based upon the musical and philosophical influences of the cultures that have fermented for so many millennia from both the fertile soils of the Indus Valley and from the ancient cloud ringed kingdoms of the Himalayas, but played by musicians who have a deep appreciation for the droning aesthetics of classic bands like Earth and Sleep. QE are quite unique, but do benefit a liberal and patient ear, so if you own a pair of these, download it.

I did feel tempted to end the review with a rather cheap and ethnocentric reference to fancying a curry, but I resisted.