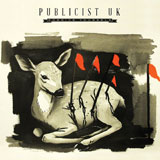 Every few years or so an album appears that takes you by surprise through its sheer audacity of expression – it’s not only that Publicist UK’s debut Forgive Yourself is the album Andrew Eldritch should have released after 1987’s Floodland instead of the disappointingly tame Vision Thing, but that the album sets itself apart and stands on its own through novel synthesis of post punk, metal, and darkwave influence. A demo by the veritable supergroup – vocalist Zachary Lipez (ex-Fleshkills), guitarist David Obuchowski (Goes Cube, Distant Correspondent), bassist Brett Bamberger (Revocation, ex-East of the Wall), and drummer Dave Witte (Municipal Waste, Melt-Banana, Discordance Axis et al) – drew attention from the forward thinking execs at Relapse Records who eventually signed them having a good sense of the band’s potential. Obuchowski’s involvement in Distant Correspondent was inspiration for much of the initial interaction/collaboration between the band members – online collaboration, in particular, has been a growing trend for musicians, allowing them to share ideas often times without even having met. This concept expands the pool of creative input and for Publicist UK specifically, relieved a great deal of the presumed artistic restrictions and expectations – a song’s evolution relied on each member’s touch for its final lasting fingerprint.

Cowards and Levitate The Pentagon ignite with understated melody and erupt with powerfully emotive walls of sound – harmonious guitar passages with Lipez’s monotone, almost spoken word delivery grounding the mix with a certain somber sobriety. Lyrics like “…but like a self-help book at an STD clinic, that ship has sailed…that ship has sailed…” recall the satirical snark popularized by Morrissey during his time with The Smiths and fully realized during his later solo outings – but at the core, the music plays like the next evolution of post punk. Joy Division comparisons are inevitable – Closer’s heavier moments serve as reference points; imagine an alternate world where Ian Curtis lived on to rally a generation of disillusioned, borderline nihilists for a common cause, and Bernard Sumner acquired a few extra distortion pedals for that precision kill…while Publicist UK’s formula may seem deceptively simple, tracks like Blood Relative in its grinding fusion of distortion and melodicism (check the final minute, please) show that restraint and timing are virtues for the seasoned.

Canary skips with a jazzy time signature, again founded on unassuming core melodies whose intrinsic momentum almost naturally graduates to the perfect climax – most tracks rely on the art of great musical storytelling; the instruments interact seamlessly, each character defining themselves through singular traits. You never quite know where the song is going, but the plot hooks you and tears a delicious hole in your mouth at the peak. And while some of the material veers just a little too close to the predictable 80s gothic rock template (i.e. Telegraphing), the group still yields a fresh perspective on the genre. This debut may not be on everyone’s end of year best list, but it certainly serves as one hell of a compelling listen and gets my vote. Well played Relapse, well played.