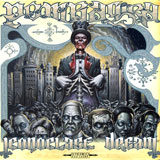 The haughty, gaunt face of Baron Samedi glares down at the zombie-like mass emerging from the gates of le cimetière, shuffling up the dirt-track, and smiles at his children…Pombagira, les houngans, those who serve with both hands, have returned to spread darkness and ruin, to sow discord amongst the haunts of man and to smash your ears into submission once again.

It’s hard to believe that less than a year has passed since Pombagira last left us frothing at the mouth and half-deaf with ‘Baron Citadel’, yet here we are listening to what may well be their magnum opus, and it was recorded less than six months after that masterpiece of crushing doom!

I’m beginning to believe that Carolyn & Pete Hamilton-Giles, les houngans themselves, really did go down to the crossroads at midnight and sign their souls away to the Baron, as this level of productivity and quality can only be explained by supernatural means.

‘Iconoclast Dream’ is a logical continuation along the dirt-track that Pombagira have been journeying down these last four years, in sound and in spirit. It takes the primal, monolithic bludgeon of ‘Baron Citadel’ and all that came before it and lays it wide-open, allowing for a greater scope and a more organic ebb and flow to the music. Being, as it is, one track spread over two sides of vinyl, there is a LOT of territory for the dynamic duo to explore…and explore they DO.

Over the course of the forty-three minute duration of ‘Iconoclast Dream’, Pombagira move from massive, tree-trunk-thick, glutinous yet propulsive riffs and tumbling, gliding drums to a twilight abyss of cavernously strummed guitar and chiming, watery reverb and back again, and from a lurching, severely fuzz-infested doom groove into a shimmering sixties-psychedelic melancholic reverie as effortlessly and naturally as a bird moves between the ground and the sky.

The plangent, twinkling tones that Pete Hamilton-Giles conjures from his guitar and vast array of amps is completely at odds with the ‘six-string jet-engine’ effect that typifies the standard Pombagira mode of axe-expression, and this contrast really makes all the difference here. Forty-three minutes of full on ‘tuned-to-the-richter-scale-fully-amped-madness’ would probably be far too much, and the resultant lawsuits from bereaved pet owners and heavily-singed and disgruntled hi-fi nuts would probably set the band back a pretty penny.

Of course, following this dip into calmer waters, the dynamic duo cannot resist bringing back those plutonium-clad guitars, so sure as night follows day, the tranquillity of the bucolic reverie is once again broken by massive fuck-off guitars and Pete’s always-impressive lung-busting bellow – a thing SO loud and SO forceful that it rivals the axe-attack in sheer volume and heaviness. Actually, at one point – in between the two drops in volume – we are treated to some guttural death grunts, which are pulled off, of course, with verve and aplomb. Tom G would be proud.

But, as with all good things, an end must always come, and so it is with ‘Iconoclast Dream’. The leviathan riff that powers through the latter part of the track gradually peters out into oscillating sustain until only a ghost of that unholy roar can be discerned, and woven through this ebbing trace can be heard a sample of left-wing British poet Adrian Mitchell, declaiming his anti-Vietnam war protest piece ‘To Whom It May Concern’ for all to hear. Powerful in its use of imagery and striking juxtaposition, this unflinchingly honest and brutally stark piece of poetry hits just as hard as any heavily amplified guitar or pounded drum and is quite fitting in its place at the tail-end of a piece of music such as this, with its repeated refrain of “Stick my legs in plaster, tell me lies about Vietnam”.

As with their last release, Pombagira have honoured the lwa, brutalised and seduced my eardrums, and left me staggered and stunned at their sky-scraping and canyon-plumbing ur-sound. Rendered half-deaf and near-mute by their sheer force, the only thing that I am left wondering as the gates to le cimetière clang shut behind me is where will the dirt-track take Pombagira next, and how soon?