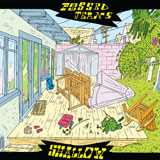 Pissed Jeans, Pennsylvania’s finest purveyors of sludgey man-child hardcore punk, have enjoyed a slow and steady ride into the hearts of many punks and trendy’s alike, culminating in last year’s critically-lauded Honeys. But the story began in 2003 with a demo cassette which the band would distribute at their earliest shows. Songs from that demo would attract the attention of Parts Unknown Records who subsequently went on to release Pissed Jeans‘ debut single Throbbing Organ/Night Minutes and Shallow, their debut album. On the strength of this album the band went on to sign with indie stalwarts Sub Pop where they have remained for the following three albums, and who are now re-releasing the record almost ten years after it first came out.

While Pissed Jeans have inevitably gotten better over the years, both in terms of the music they make and in frontman Matt Korvette’s overall loveable buffoonery, Shallowis an incredibly fully-formed album and it’s a testament to the band’s intentionally limited scope that pretty much any of the songs on Shallow could have fit in on any of their subsequent albums. While later albums show slightly more self-control and are slightly less rough around the edges – demonstrating, perhaps, that the band have become more studio and road-hardened over the years – musically Pissed Jeans have always worshipped at the altar of Black Flag and the Stooges, and this is clear from the feedback dripping moments of bratty opener I’m Sick to the apocalyptic punk epic Wychovia which closes the album.

Where Pissed Jeans differentiate themselves from the rest of the pack, however, is in singer Matt Korvette’s lyrics and vocal delivery. Korvette has repeatedly rejected the notion that Pissed Jeans are some kind of bro-punk band and I’d be inclined to agree with him. Although he writes about his very male neuroses, he’s inviting everyone to  join him in them, to laugh at them and to ultimately endear ourselves to his issues which are generally explored in intentionally dramatic and knowingly self-obsessed ways. Whereas the lyricism on Shallowdoesn’t always display the kind of economy and crystallisation of ideas that would come on the following albums, it is still very much at the heart of Pissed Jeans‘ appeal. Throughout all of the band’s work, he explores social anxiety, sexual inadequacy, the mundane aspects of daily life and his health concerns which, at one point in Shallow, involves being simply too-filled with spunk.

Pissed Jeans also dabble in satire and irony; Closet Marine inverts the kind of issues that young gay people have to deal with by making the protagonist a closet “marine”, having to pledge allegiance to Uncle Sam in secret late at night to escape the wrath of judgemental parents. And then there are the ridiculous moments where Korvette complains of breaking his own heart or sings about Little Sorrell who, if we’re reading it right, is a horse that “couldn’t close his eye”.

Simply put, Shallow is as great an album as Pissed Jeans has ever made and the raw energy the band display throughout its eight songs is completely infectious. As the album has been out of print for a number of years, this is a very timely and welcome reissue that you would do very well to get your hands on before it disappears again. If you’ve never heard the first album, you won’t find any surprises here but then, if you’re a fan of the band, you wouldn’t want them any other way. Far from shallow, this is Pissed Jeans at their anxiety-ridden, socially awkward best.