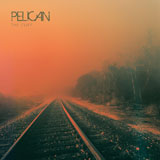 Illinois post-rock veterans Pelican may not have reached the same level of popularity as a number of their peers (but realistically who has reached the same kind of cult status as Isis?) but around fifteen years into their career, it’s clear that there’s a dedicated fanbase keeping the (largely) instrumental four piece going.

The Cliffmarks the bands fifth EP release and their first since their 2013 album Forever Becoming. Two new tracks sit alongside two remixes, one from the legendary Godflesh and Jesu mainman Justin K Broadrick and another from the new project from members of the aforementioned Isis, Palms.

The first original track, and the EP’s namesake, jams in immediately with a gnarly, present bassline. Through some splashy cymbals it moves into a fairly ‘typical Pelican’ guitar line, driven by palm muting, with the odd melodic flourish. Vocals come in, and while drawling and relaxed, are used much more than the sparse examples on previous works, to the point of being overbearing. The fact they are quite prominent in the mix doesn’t aid this, and they unfortunately dominate the swelling, warm chords and climbing guitars the otherwise instrumental outfit are known for.

Then we’re into the first of the remixes. Broadrick’s offering kicks in with some synth tones that wouldn’t sound amiss on a Boards Of Canada track, before melding into a multi-layered soundscape that’s cut right through by a much more brooding, weightier bass tone. It’s all very cinematic, and very ‘Broadrickian’. Synth drums cut in that borrow heavily from the Jesu school of thought, and the dreamy, echoing guitars enforce this. Things expand and surround, and despite being a tad on the overlong side, this is the strongest track of the four.

There’s nothing wrong with Palms’ version, but it just feels a tad less cohesive. The densely layered start feels a bit too intense, like there’s a little too much going on at once. The vocals surface from the squall, echoing and ethereal, and these serve to bolster the track much more than the sub-90’s Alt Rock vibes from the original track. There’s some canny backmasking on the guitars, but the stand out feature this version hinges on is the huge, tempo shifting drum groove that powers through the track.

Closer The Wait is back into familiar Pelican territory. There’s a wash of dreamy guitars, shimmering textures and meandering, melancholic riffing, underpinned by soft, warm, enveloping bass. It’s an easier listen than the title track, but both will do little to combat the detractors that call the band ‘boring’. They take very few great risks, which is what a band at this stage in their career could utilise the EP format for.

Indeed, one can’t shake off the nagging sense that with The Cliff especially, the band put in the bare minimum of effort, and left a fairly standard blank canvas for the artists providing the remixes to paint on. When the more interesting and original material comes from the guests on a record, you have to question the motives of the people behind it. Perhaps one more for fans and completests than anyone else.