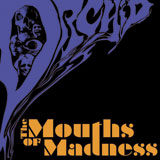 I’m too young to remember the seventies, to have had my world and mind blown apart by this immense new music emanating from the boroughs of Birmingham, a sound becoming known as the devils music. When there was a true sense of rebellion in listening to this heavy metal, being a part of something so new and exciting that the musical world would never be the same. I suspect the guys in Orchid are also too young to have any vivid recollections of this era, but there is still a stirring nostalgia in those atmospheres that still persist in the grooves of Sabbathian vinyl. Something with a primal potency that puts you under its warm fuzzy spell.

So why try to re-imagine something so connected to a time that has long slipped into the annals of analogue history? With so many detractors screaming plagiarism and doubters stepping onto those pedestals pointing accusatory fingers in Orchids direction exclaiming unoriginality. Well its as clear as day that passion, is the reason, an honest and powerful love of the music they honour in such fine form. Proof is smeared all over ‘The Mouths of Madness’, as it was ‘Capricorn’ before that. It boils down to one thing, the songs! Go play yourself ‘Silent One’ at a deserving volume and as the song builds up from a modest start into the foundation stirring finale and let it show you its earned those colours. It is certainly clear the song craft in Orchid has stretched beyond their previous output as they whittle and hone those skills into deadly weapons.

It matters not that they sound so close to those classic records made by the founding fathers many moons ago, and close they do sound, because this album is chock full of songs to a quality that is rare these over-saturated days. Sounding so full and authentic in that vivid production job dressed up like a kaleidoscopic acid trip ready to ride your desensitised ass through a time portal to 1974.

Steadfastly taking its cues from Sabbath, early Pentagram and Lizzy, you will even find the odd tripped nod to The Doors on here, as evident in the luxurious tones of ‘Mountains of Steel’. Yeah you’ve heard the sound but not the songs and be it said ‘The Mouths of Madness’ forges itself from the truest steel.