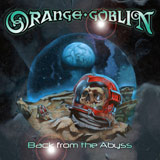 As an Orange Goblin fan of some 18 years standing I will admit I was nervous when the band decided to go professional and turn the band into a full time proposition. I was nervous that the band wouldn’t last the pace that the touring schedule of a professional band demands…Ben Ward certainly seemed like a candidate for hospitalisation based on past habits. I was also nervous that the pressure of having to deliver albums to keep the momentum going would dilute their quality…obligation becoming the driver instead of desire to create new music. Let’s face it they hadn’t been the most prolific band over the previous ten years. It turns out I needn’t have worried on either count. The band have embraced the life of a touring band striking the perfect balance between wringing the enjoyment from it and maintaining a professional outlook to deliver every night. Similarly with the band as their main focus now, it seems to have galvanised them into a tight unit that can shit awesome songs in their sleep!

A Eulogy For The Damned was an excellent album that hit new highs for the band in terms of production and song writing and was sure to be a tough one to follow but Back From The Abyss is a more than worthy follow up, in fact it exceeds its predecessor on every level. Everything you could possibly hope for and expect from an Orange Goblin album is firmly in place…and more.

Each song is absolutely the peak of excellence that it could possibly be, every one being full with riffs, catchier than a cold sore at a teenage disco and melodies bigger than…well…bigger than Ben Ward himself. I’m not even going to bother going into detail about each song here, what’s the point? You’re all going to buy/stream/rip this album for yourselves and you will grow to love each and every one of them. Obviously it’s better if you buy them…the guys have to eat you know!

Some stand outs, however, are opener Sabbath Hex which follows in the Orange Goblin tradition of grabbing your nuts from the off and giving them a mighty squeeze, The Devil’s Whip is a fucked up Motörhead tribute that bears close resemblance to Iron Fist but imbues it with Goblin’s belligerence and humour and Mythical Knives has a chorus 99% of bands would have given their left bollock to have written. The stand out track, and possibly the best song OG have ever written has to be Heavy Lies The Crown. Starting with a tasty, bluesy riff from Joe Hoare, the song builds through to its magnificent and mighty heroic conclusion that gives any Viking metal band more than a run for their money. Everything about this song is perfect, if you don’t find yourself randomly humming its melodies and being given to outbursts of shouting “To Valhalla” for no good reason then you are either deaf, dead or a complete cunt!!!!

The band, as well as writing a fantastic set of songs and having possibly the best production job of their career, also all play a blinder. Bassist Martyn Millard gives it the Geezer Butler treatment throughout, tasteful, understated yet always imaginative and complimentary to the riff. Drummer Chris Turner has room to switch from fuck off great big grooves to full on kick arse rock and roll locking in with Millard to forge a rhythm section so tight you’d struggle to fit a piece of paper between them. Although I love all the guys equally and as a unit they gel with a cohesiveness that is rare in bands, I have to single out Joe Hoare and Ben Ward for special mention. Joe is all over this album like Jimmy Saville in a kids’ ward!!! As a player he has always had the ability to peel riff after riff from his guitar, almost without thinking and his playing has always been succinct, tasteful and appropriate but here he has really given himself free reign to explore his instrument. The whole album is choc full of subtle layers that enhance and never overpower the song giving the band an added layer of depth they’ve never reached before. On listening to the album I did wonder how he would ever hope to recreate these songs live but now, having seen them in a live setting, it’s clear that his embellishments serve to make to album listening experience a magical thing but that the strength of the riffs in their basic, live essence are more than enough to carry all the songs through on stage.

Now for Ben Ward. His distinctive bellow and sense of melody has never been in question but here it feel as though he has set himself targets way in excess of where he’s been before, both melodically and lyrically and has pushed himself to smash his own barriers. His melodies here infect and invade your head like never before and his voice has become stronger through the rigorous touring. Lyrically he covers good old themes familiar to metal such as Vikings…all metal bands should write a Viking song…but his way with words works in tandem with his sense of melody to create pictures in the mind that are every bit as memorable as the tunes.

Well, it turns out I could find the words to write about this album after all. One of Britain’s finest metal bands ever has quite possibly turned out their finest album ever. I guess this would make it a classic right? 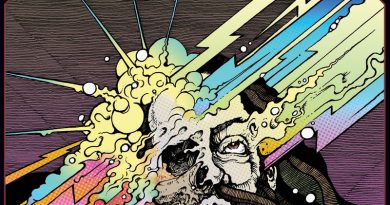