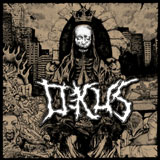 For the grand old price of nothing, this Irish lot will gladly provide a wake-up call in the form of their self-titled debut. As a rule of thumb, the more innocuous the band name the more likely they are to be a bloody loud racket and that’s exactly what Okus are. Musically speaking, they’re a bit of a tearaway bunch, combining crust and grind in equal measures and slamming them together in one almighty crunch.

‘Blood And Oil’ lurches through the speakers first like a half-malevolent drunk, equal parts brooding misanthropy and then frenzied hardcore fronted by napalm-throated drill sergeants. It’s the best of two filthy worlds: if you love EyeHateGod’s sudden sprints and Corrosion Of Conformity’s early days as a hardcore band before the Southern boogie bit, you’ll be in heaven for Okus have these in skip fulls.

‘Redemption’ starts with a firestorm opener spewing forth like a torrent of fiery vomit and doesn’t stop until ‘Bodies’ steams in on a riff like their amps are stuffed with broken glass. But hands down it’s ‘Light Obscene’ that’s the ultimate showcase of what makes them great: a long churning introduction gives away to a savage tearing of strings and snares guaranteed to scare any passers-by.

But that energy that propels them never truly lets up. They even find a bit of time to throw in some very primitive Entombed shapes – that’s a good thing by the way – into ‘Jackyl’, just to casually show they can. ‘Burn It To The Ground’ is the closing track, and adopts a scorched earth policy when it comes to the drumming, showing that grind ‘n’ roll (along with almost anything else and roll) is a legitimate genre choice.

‘Sludge mixed with everything else mixed in’ is experiencing something of a boom these last few years: acts like Iced Out, Razoreater and the rest of the Church of Fuck roster to name a few are hammering the toilet circuit up and down the country, and Okus are joining that illustrious lot with some cross-over cacophony of their very own – it’s ugly and unpretentious, but with just enough finesse and tightness to pull it all off without sounding like a total wreckage.

If you cut your teeth on the likes of Amebix and Napalm Death, you’ll be in heaven with Okus.