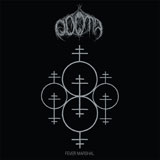 Jarmo Nuutre is a peculiar figure. A graphic designer, car fanatic, tattoo artist and a lover of all things sludge and heavy it seems. Under the name Odota he has created a peculiar sounding, sludge infused black metal record with the title Fever Marshall, which is well worth checking out.

Nuutre found some time among his other musical activities with Blood Pavilion, Hjem and Skull Trading after leaving mammoth sludge formation Talbot. The Estonian musician has made a classic sounding album with the raw sound of early black metal and the surging drag of sludge. Let’s look into that a bit further.

The title track starts with a foreboding intro, reminiscent of a Celtic Frost in its languid atmosphere. Strange percussion starts to fill the void, while sharp guitar play is slowly pumped in. Suddenly the drums start crushing down in a slow, muddy pace. The song swells to a pumping industrial sounding track. The drums form the centre of the sound, which guitars sweep around and vocals are barked and screamed. Peculiar clean parts keep the listener focussed. That eclectic sound can be heard on the intense opening of Horse Thief Special, which is more drawing from the heavy, swamped sound of Goatwhore meeting Ministry in a dark alley in Oslo.

Staked Plains follows that up with an experimental opening of creaking doors and harrowing noises. Slowly cascading riffs fill the rest of the track, which remains a haunting sound experiment mixed with doom. The track Bad Medicine is a violent surge of unrelenting black metal though, filled with blast beat drums and wild screams. This all happens in a wild six minutes of musical violence. The continuous barrage is furious and unrelenting, giving little rest to the listener.

That intensity continues with the swirling guitars and condensed sound of Cannon. Wild shrieking vocals linger through the distorted sound, tight drums control the base and the song just waltzes onward. Then we continue with Half Eagle, a jangling intro with a sound like sprinklers under the guitars. There’s also the rough, electronic sounding crackle running through it, like the sound of rocks falling in old video games on the NES or SNES. The song unfolds as a layered adventure in soundscapes again. It only lasts for a short while unfortunately, because these are the puzzling tracks, where Nuutre becomes really captivating.

Rattlesnakes Unfold is like a dense fog full of violence. Fierce vocals are covered by a blanket of noise that seems to come from nowhere. It confuses the listener, making the song sound random and strange. Drums, though consistent, are more like random bursts due to the sonic overwhelming force of the track. It’s eclectic nature and intensity is representative for the record of this one man band. This is definitely an interesting album to check out (which you should).