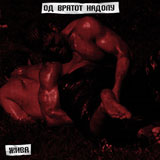 I must admit, my knowledge of Macedonia is about as extensive as the number questions I can vaguely guess the answers to on an average round of University Challenge. What I do know is that basement-dwelling sludge-goblins Od Vratot Nadolu (OVN) are capable of creating enough racket to shake the capital of Skopje to its ancient foundations.

Iceman (drums, vocals) and Maverick (bass, vocals) seem to have taken copious cauldrons full of death-cheating doom, thrown in the blood-spitting elements of power-violence and cast a witch’s spell of shattered misery to conjure up one of 2011’s ugliest slabs of noise. This record reeks of the underground; basement gatherings of those already succumbed to the power of the grooving bass riffs and cavernous drummed demolition nod their heads in mystical enchantment. For a two-instrument attack, OVN sound truly enormous as the hulking density of opener ‘Videodrom’ kicks into existence. Maverick’s bass throbs like the worst migraine imaginable, yet maintains such a giant amount of solidity that it’s a wonder the track is even allowed to slow to a gentle crush before petering out into nothing.

The rest of the tracks follow in the same ferocious vein: rising and falling, but always remaining tight and intimidating. ‘Seriozen Delirium’ is short and sharp and the double-kicks sound like rapid mortar-fire as the vocals growl their way under your skin. ‘Foreva’ slows the speed, but still the bass takes on an ever-distorted, rolling downturn as the track lurches into death-doom territory with cymbals exploding in its wake. ‘Drugar So Problemi’ introduces sound bite samples for the first time up against yet more gigantic riffing, and ‘Gangsterska Lubov’ adds in some echo-ing spacey choir harmonics to accompany the metallic pandemonium. ‘…Taa Sjebana Faca’ barks some military-style orders towards us, before the plodding bass takes over for yet another apocalyptic hailstorm. ‘Nekoj Vi Gi Ebe Decata’ introduces an element of swagger and progression; the riff staying constant, but the drums evolving to the sound of an added electronic drone circling above the mix. ‘Od Vratot Nadolu’ is somewhat of an anti-climax as a closer. By-now standard tombstone bludgeon and rasping desperation overpower the well-controlled tribal floor-tom and gentle cymbal splashes as OVN the band teeter out of your speakers and back into their pit.

This is an angry motherfucker of an album that felt hard, straight and powerful, whilst retaining fantastic control over its chaotic filth. If you enjoy hardcore, punk and even grindcore with your sludge, this could well be your new favourite band. Its outfits from lands afar like this that give me hope that colossally heavy music is alive and well the world over.