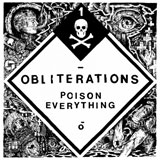 Leave it to a band like Southern Lord’s Obliterations to make all of us who’ve archived our pre-Rollins era Black Flag records retrace our steps, to ponder why tracks like What I See, Depression, or Padded Cell ever left our tier 1 rotation – Dez Cadena was angry in 1981, and it seems that Stephen McBean  (of Black Mountain and Pink Mountaintops fame) has gotten a little angry in 2014, trading in the bell bottoms and fleeing the Vancouver communal countryside for some Southern California sun – relocating to Los Angeles replete with tattered jeans and punk snarl; I must admit, Obliterations punishes with compelling authenticity on their debut, Poison Everything – McBean shredding the fretboard and sharpening the axe, Austin Barber (Saviours) and Flo Schanze on bass and battery respectively with Sam James Velde (Night Horse, Bluebird)  giving his best impression of a demonically possessed Jon Joseph (voice, The Cro-Mags) – complete with fully pissed off macho muscle and cheese grated vocal cords. But take note, the rediscovery of traditional late 70s/early 80s punk (even if it’s near flawlessly executed) is not enough to welcome balloons, parades, and an outright celebration of the next greatest ‘thing’.

What is, however, worthy of our attention is a group of musicians willing to inject unexpected influences into the mix; tracks like the slick, mid-tempo Shame drive and drone with as much of a nod to Spacemen 3 as to Greg Ginn during his more accessible glory days with Black Flag (we’ll just pretend What The… never happened); but just like label mates Black Breath, who unapologetically raid the early 90s Swedish Death Metal treasure chest, Obliterations does shamelessly worship their influences, recreating the early 80s hardcore scene as a focal point of inspiration – as expected, it’s a blinding speed kick-ass slash affair on the majority of the album’s 13 cuts, with songs like Mind Ain’t Right, The One That Got Away and The Narcissist landing critical hits before your ears know what the fuck went down; the former boasts some pit-ready grooves in its final seconds and you might just find yourself parked on the side of the road, headbanging and solo moshing (as I was) like a runaway psych patient – in fact, most of the record’s better numbers like Head Wound invoke that kind of mania. This track has the right charisma and a ripping main chord progression to match.

But ironically, it’s when the band slows things down on songs like Open Casket and the title track that things get interesting (and more memorable); the former with its repetitive swirling lick comes dangerously close to the atonal evil of (Greg) Ginn’s Crazy Girl (from 1985’s In My Head) whereas the latter plods and stomps with a venomous swagger, anthemic in its dirge, and badass in its head nodding appeal. But this band is not so much about blazing trails as they are setting fire to the whole god damn forest – originality is not the point, but making your ears bleed from tweaked out, amped up brutality is…and I’m certainly okay with that.

Yet I can’t help but wonder what else these boys have in store for us if those more non-traditional doors are blown wide open and explored…there may be more to this story than we think. But for now, I’ll reload this 29 minute hit and keep moshing.