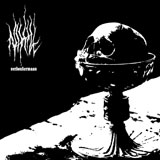 A rare foray into black metal territory for Hydra Head, a label which – to be fair – is by no means narrow-sighted in its output, but the label behind this album and the general angle of its catalogue of releases is almost certainly why Nihill’s Verdonkermaan ended up in the figurative lap of The Sleeping Shaman – a website that, for the most part, sticks to it’s doom, stoner, sludge guns. I should say something here about the recent closure of Hydra Head – sadly Aaron Turner’s label is shutting down after nearly 20 years of putting out some absolutely belting releases from cult classics such as Jesu‘s eponymous first full length, to later greats like Torche‘s ‘Meanderthal’. As noted in an online social post by one of my fav bands The Afternoon Gentlemen, the prices of releases had become somewhat on the high side in recent years – whether or not this was a necessity to try and keep the label afloat but actually meant that many felt they could no longer buy Hydra Head releases as much as they’d want to anymore, I’m not clear on, but whatever the reasons for the closure, it is a shame to see a label that has championed some truly great bands come to an end.

I digress, Black metal has experienced a bit of a surge in popularity in recent years – in the mainstream and underground alike – from almost completely unknown bands like the excellent Gaunt (featuring members of Lich, BoW359, and Human Junk) quietly emerging out of the Kent ‘hardcore’ scene; to Wolves in the Throne Room breaking free from the often exclusivist and ‘trve cvlt’ tendencies associated with the genre, and playing the main stage at last year’s eclectic Supersonic Festival.

I jumped at the chance to write this review because I have a total soft spot for black metal, and might be the only bugger who does on the Sleeping Shaman’s list of contributors(!) – although I hope not, and that probably isn’t true… or ‘trve’ at least. It might be because I’m younger (sorry you old bastards) than most of the contributors; or, whether I like to believe it or not, that I’m just comparatively the whipper-snapper-hipster of the bunch that isn’t yet wise/jaded (delete according to your own age) enough to give the whole make-up wearing lot of plonkers a wide berth. I understand that black metal is a double-edged sword – but for all the worthless pantomime crap that bands like Cradle of Filth have championed for almost all of their existence, there are plenty of much better things happening with far less emphasis on corpse paint and spikey gauntlets.

Away from the stadium antics of Immortal (for the record I actually like ‘Sons of Northern Darkness’) and the hilarious fantasy-folk black metal of the likes of Finntroll (for the record I actually… never mind), releases in recent years such as Wolves in the Throne Room‘s “Two Hunters”, Sunn O)))‘s “Black One”, and (before they went bollocks) Nachtmystium‘s psychedelic and melodic “Instinct: Decay” all draw on what makes Black Metal interesting and seperates it aesthetically from the pomp and excess of heavy metal. All of this stuff, not to mention the likes of Xasthur and Leviathan, represent works of black metal, or black metal influenced music with real artistic merit. And for anyone still sceptical or feeling very cautious about approaching the genre altogether, I cannot recommend enough Mount Eerie‘s “Wind’s Poem” – Phil Elverum’s take on black metal filtered heavily through his unique style of lo-fi indie folk to produce an often overwhelmingly beautiful album of both whisper delicate frailty and foreboding power that marries the lyrical themes to the music itself pretty much perfectly.

Whether or not all that I’ve written up to this point amounts to anything more than a list of black metal that I like; reasons I think said black metal is good; and justifications for defending a genre which has a (not undeserved) reputation as ridiculous, racist, nationalist etc etc. – I’ve still got to review this album…

Nihill’s Verdonkermaan is, I’m pleased to find, another really great modern black metal release, or – maybe more accurately – a release which makes a step away from black metal but takes the sonic cornerstones espoused by the genre’s innovators and does something interesting with them – remaining rooted in tradition but coughing up something new.

Verdonkermaan is the third full length release from Nihill – the final part of a trilogy following on from first Krach and then Grond. Verdonkermaan sees the band continue to focus on spiritualsim, death, ritual, occult practices and other generally bleak themes and topics lyrically; and plunge even further into what makes them sound like Nihill: discordant, repetitive, and near anti-melodic, with everything coated in a layer of harsh white static noise. Nothing in the structures of the songs lends the album any sense of the listener being able to find their footing – the whole thing is the musical equivalent of being lost in a frost-bitten expanse of introspective nightmare.

The song lengths (generally pushing the eight minute mark) and multi-part titles like “Oerbron: Returning to the Primal Matter” suggest something more post-rock than black metal, and in that sense a good description of Nihill’s approach might be that they take that crushing atmospheric repetition – perhaps done best on albums like Nuerosis‘ ‘Through Silver In Blood’ – and apply to that their own blackened, less hypnotic agenda. That kind of fundamental post-metal influence might go some way to explaining how an ostensibly black metal album ends up coming out on a record label like Hydra Head. That aside though, however you feel about black metal, this is another great example of a band breathing new creativity into the genre, but retaining the sonically and lyrically serious approach that many would argue it started out with; there’s enough of a balance between fresh approach and a debt to early Burzum and Darkthrone to interest a broad audience.

Make no mistake though – however you look at it, this is pretty grim and horrible stuff, but if that’s your bag then Verdonkermaan presents an absolute treat to you. Bluuueergh.