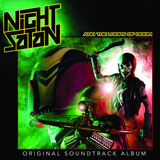 We live in an age where a hell of a lot of people (myself included) seem to love soundtrack albums, especially those of 70s/80s horror and sci-fi films. The ‘Nightsatan And The Loops of Doom’ soundtrack has all the squakky synths, big reverb toms, and piercing laser leads you’d expect accompanying a violent post-apocalyptic thriller set in the year 2034.

The film, in which Finnish purveyors of Lasermetal, Nightsatan – the preposterously monikered Wolf Rami, Inhalator II, and Mazathoth – play themselves, follows the adventures of “a trio of synthesizer warriors who conduct musical rituals in order to maintain what is left of their sanity”. Recorded in English then dubbed into Italian for extra “authenticity” the film has been praised by the likes of Fangoria and Empire. I haven’t seen it but I have seen the trailer which makes the whole thing look, to my eye at least, something like a Troma production, albeit a very superiorly put together one.

So, it’s the kitsch, retro styled soundtrack of some kind of nudging, winking inside joke sci-fi/horror film, it’s going to be awful, surely? Well no, not necessarily.

‘Lost Karelia’ opens with waves of white noise wind and an ominous drone, then the sparkly fantasy lead comes in and we’re slow panning across some kind of vast desolate landscape.

‘(Obey) Thy Master’ blends in seamlessly following the same melancholic, ethereal idiom. Soon however the heartbeat bass, military snare, and Miami Vice toms of the drum-pad pick up the pace and drive things forward.

‘Theme From Loops Of Doom’ builds steadily and self-assuredly epically; each new layer of instrumentation added with a palpable confidence and pleasure. It’s a theme tune’s theme tune.

In parts ‘Secret Of The Mystery’ has the very clearly defined twin synth lead and guitar sound of one particular 80s track that I cannot for the fucking life of me remember the name of, and which is doing my head in to be honest.

The breathy, airy ambience of ‘Doom Doom Girl’, is followed by the synth choir bombast of ‘Nightmare In The Night’ before Nightsatan prove that they can indeed go full on Goblin for ‘Doomsday Judgement’.

Tension builder ‘Enter The Loop’s modulated lead manages to sound like its attempting to form the words of its own title, while ‘Mazathoth Speaks’ builds grittily, climaxing in a loop of raw sampled screams.

Flanging overdriven guitar and grainy synth blend to give ‘Rejects Of The Wasteland’ an intro which contrasts heavily with its Vaseliney predecessor. The track fades to a literal whisper before entering a second, more triumphant movement. The big toms are back and the synth sounds are icicle sharp.

‘Echoes Of A Dying World’ is a sorrowful ersatz-oriental lament which is swept away on the same white noise winds that opened the record. A robotic voice intones menacingly over the swishing.

‘Loops Of Doom End Credits’ brings things to a suitably valiant close with something of an 80s TV show vibe going on – I’m automatically imagining freeze frames of the cast with their names next to them.

When it comes to ‘Nightsatan And The Loops Of Doom’ the album, I’m not sure the film really matters. The back-story, the pseudonyms, the daft “Lasermetal” tag, you can make of all that what you will, but it doesn’t change the fact that ‘Nightsatan And The Loops Of Doom’ is a pretty wonderful and authentic sounding pseudo-80s synth soundtrack album.

Possibly some Death Waltz subscribers will turn their nose up at this 21st century imposter but, speaking as a fan of the “adventure, horror and synthesizers” that Nightsatan promise, I really enjoyed it.