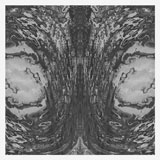 Necro Deathmort said it themselves; they don’t give a single fuck. “We’ve stopped caring that each new release might alienate fans of a previous record” is what Matthew Rozeik says on their bandcamp page. That is undoubtedly a big part of what has allowed himself and A. J. Cookson to evolve the sound of Necro Deathmort so freely, rapidly, and utterly over their seven years together.

The Capsule is Necro Deathmort‘s twelfth release and in some ways it feels like a logical progression from last year’s EP3 but it’s more cohesive than that. In fact, it is possibly the most cohesive thing Necro Deathmort have ever put out because The Capsule is essentially the soundtrack to a film that doesn’t exist. And it’s a brilliant film; at times claustrophobic, at times apeirophobic, it’s a bleak yet moving sci-fi masterpiece, every single shot of which is beamed directly into the mind’s eye via the ears.

In Waves‘ motoric beats propel us through a montaged evolution of the equipment and tech that make The Capsule‘s mission possible. Designs and re-designs. Dogs and apes in spacesuits. We see those who have gone before, those who have failed, those who have died. Pushing forward, evolving, improving, getting further and further until at last we arrive in the here and now of Necro Deathmort‘s future. First Rays is the unending vastness of the exterior spacial void versus the artificially, electronically maintained security of the interior with its frenetic, unending babble of binary behind every panel, in every wire.

Moonstar: the sinister theme of a mission already gone horribly wrong. A percussive panic attack over chords of mounting doom; the whisper-scream of space-terror echoing around air-locked chambers. Capsule Sickness‘ soft synth sounds penetrate, beginning in the gut and the brain. Is it an awakening? If so, it’s an uneasy one. Wooziness grows, the room spins, it’s all too much and there’s too much of it. The confines of the capsule seem to shift in and out of register and everything becomes just as slow and fuggy as a Zero G opiate nightmare.

Crux is a flashback. The memory of what drove us to this point. The tragedy whose culmination is a human being alone in the unending nothingness of eternal night that is space. The recollection is bitter-sweet at times, outright painful at others. The synth-tones grow harsher, sharper, until their saw-teeth draw blood. Mono/Serum: are we falling or floating? How deep can you go when there’s no such thing as up or down? Is that a countdown, we can hear somewhere beyond the undying echoes of our own cries, and if so, what is it counting down to?

Peklyn is the culmination of the mission. The end is in sight but it’s all so dreamy and druggy it’s hard to believe it can really be true. Is our oxygen starved brain really seeing these things? Have we somehow really made it? Screens inter-cut shots of us in stasis with this new, almost heaven-like state. Are these just flashbacks or is the former the reality? Did we never awaken? Or have we sunk back into an infinite sleep? As the credits roll, we’re left to draw our own conclusions.