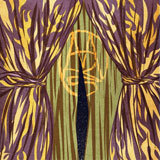 French trio Mars Red Sky (Julian Pras-vocals/guitar, Jimmy Kinast-bass/vocals, Matieu Gazeau-drums) has emerged as one of the more unique heavy rock acts of the past decade, their 2014 opus Stranded In Arcadia massaging a Hendrixian neo psych fuzz popularized by bands like Sleepy Sun and turn of the century era Dead Meadow – and while the heavier moments showed enough teeth to satisfy most, the band was almost too nimble in their tightrope walk between mind expanding psych and relative pop accessibility. Although one of the finer releases of that year, the album belied the band’s name and yielded a decidedly ‘terrestrial’ listening experience.

Building on the momentum of their Providence EP (released earlier this year), a moodier 3 track teaser and foreshadower of great things to come, the seven song/40 minute Apex III (Praise For The Burning Soul) (Listenable Records) not only shows its teeth, but threatens to gouge with a lock jaw staying power evident from the ominous opening notes of Alien Grounds or the sultry skulk of The Whinery. From the gate the vibe is darker and direction far less predictable – Apex III is almost a concept album by loose definition, trailblazing and space exploration serving as metaphors for the band’s audacious experimentation. The title track, in its vocal/lead riff trade off builds to a culminating push button ignition – the music lives and breathes, and comes close to the ultimate personification of sound. One of the band’s inherent strengths is the intrinsic organic quality to their music; chalk it up to production/tracking (credits to Gabriel Zander, Jacob Dennis), the right amps, the right pedals – the more open minded might venture to say it’s the spirit of artistry and the human touch – Pras, Kinast, Gazeau – their creative chemistry.

Apex III is much less of a track by track fusion of relative extremes – Stranded In Arcadia was rather calculated in its ‘doomy’ pop appeal; its continuity and ease of flow benefitting from a consistent mix of downtuned fuzz and palatable, accessible melodies. Conversely, there’s less of a tightrope walk with their latest – the trio sets a firm divide between the massively heavy Mindreader to the tame Under The Hood and Friendly Fire, allowing fans of each style to fully indulge. Mindreader is arguably the darkest of the collection, its lumbering groove built on minor keyed electric acoustics – the rhythm section pounds with impenetrable inertia, Pras’s haunting wails reverberating in tow. The song is indeed a definitive statement on the trio’s evolving confidence to sound like, well, themselves. Comparisons are futile at this point, because the group’s innovations are now (arguably) genre defining, and at the bare minimum wholly singular and not quite like anything or any sound out there.

Under The Hood and Friendly Fire do provide a little tension relief and recall the more melodically sublime moments of earlier releases – a stark contrast to the brooding undercurrent that predominates in the album’s first half. Although the heaviness is dialed to more controllable levels, the increasing complexity of arrangements does much to please and is easily impressive for objective listeners and obviously for fans who have a reference point to gauge the group’s evolution. Album (proper) closer Prodigal Sun drives that point home in its climax; like a jar of escaping fireflies, at once chaotic and beautifully harmonious, the trio achieves an unexpected and delightful cohesion as competing licks combine for an intricately textured melodic finale that is one of the best experiences of the journey. Extrapolate that metaphor and you’ll get a sense of this band’s easy contention for best of 2016. I’d say that’s one hell of a lasting impression.