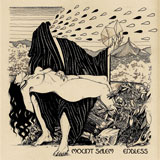 Mount Salem have what we like to call in the reviewing business ‘swagger’. That’s not the same as ‘swag’, that’s for douchebags. Swagger is a weapon in the arsenal of any good doom band; it brings the spiritual home of heavy metal, the blues, to the forefront while laying on groove and riffs a plenty. ‘Endless’ is a reissue of the band’s debut EP with a few bonus tracks, and Metal Blade have picked themselves a serious contender in the future of doom.

‘Endless’ has an uncanny swagger about it, from the rumbling blues of the opening ‘Good Times’ which is layered with a wonderful sense of groove. The ethereal, powerful vocals from organist Emily Kopplin compliment the song perfectly, and there’s something almost country about its mood. This is music to drift across the plains of the Mid West to. ‘The Tower’ is a brooding monolith, rising from a hazy psychedelic cloud to graze the sky above. Mount Salem sounds like ‘The Bees Made Honey In The Lion’s Skull’ era Earth and Jex Thoth had a baby.

What really makes the band stand out is the use of the organ. Many doom bands use keyboards or similar effects in their music but it can come off as forced or unnecessary. Mount Salem uses the organ subtly, weaving melodies in amongst the riffs. Sometimes you don’t need it at all, such as in the groovy intro of ‘Lucid’, and this restraint means that it has a much greater effect. When it kicks in behind a grinding riff later in the song, it works so much better.

‘Endless’ is an exercise in ‘less is more’. Mount Salem are a power quartet that do nothing fancy, yet tick all the right boxes when it comes to song writing and execution. For me, Kopplin is the highlight of the record; her rich voice has a timeless quality that compliments the music well. She is an impassioned preacher of doom, be it the softer style of ‘Full Moon’ or the powerful chorus of ‘Lucid’.

‘Full Moon’ is probably the best track on the record. It showcases Kopplin’s vocal range well, along with the different capabilities of the band. From the brooding intro to the thunderous gallop, Mount Salem can do it all, and better than most. Their mystical, occult lyrics are par for the course, but it’s executed so well that you can forgive them for doing nothing new here. ‘Mescaline’ is exactly the country style I was alluding to earlier, and in just shy of three minutes demonstrates a mournful, Western twang that permeates through the rest of the record. Its sister piece, ‘Mescaline II’ is crushing, with Kopplin’s vocals soaring over titanic riffs and psychedelic soloing.

‘Endless’ is a great record, a record that doesn’t rewrite any rules of the genre, but provides textbook examples of how to do it right. Cracking songs, memorable riffs and a hauntingly beautiful vocalist provide Mount Salem with all they need to succeed. Just listen to ‘Hysteria’ and tell me I’m wrong.