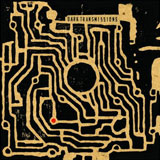 I’ve known of Birmingham’s instrumental quartet, Mothertrucker for some years now, so it was with real interest that I picked up their newest offering ‘Dark Transmi55ions’ to give it a listen…I’ve previously found the band a little too dry on previous recordings however, here Mothertrucker have created not only a beastly sounding record…but show off easily their finest songwriting to date!

For many, ‘post metal’ brings to mind connotations of just plain boring ‘yes we know you like Isis’ slow moving build ups, followed by predictably massive peaks, however here Mothertrucker have definitely managed to produce a somewhat refreshing version of the over-saturated genre. It is definitely an album for those who like ‘Post Metal’ (bands such as Pelican, Isis, Neurosis etc)…however I think Mothertrucker have really managed to give themselves a character of their own here. It’s a character built on a sound of thick, dirty distortion, dark and subtle atmospheres, head-bopping tempo changes and rewarding climaxes. They definitely bring the heavy on this album, and for real riff-lovers there is no doubt that Dark Transmi55ions will be a favourite!

Maybe its just me, but when I find myself really growing to like a band, it’s the little quirks (like naming a track ‘You Don’t Cut Another Man’s Steak’) or just inspired moments here and there that prompt an ‘aaaah’ and keep me listening that really make me a fan, and Mothertrucker definitely have these. It’s not clinically produced, it probably won’t cause massive waves in the scene and it’s definitely not cool…that’s exactly what I like about it! Mothertrucker have just created a real labour of love, Dark Transmi55ions is filled with personality, balls and some just totally rad riffs, you can tell that they’ve had a lot of fun making it!

Personal favourites of mine are ‘Festival Strength,’ ‘You Don’t Cut Another Man’s Steak’ and ‘Church Stretton’…and ‘Sweet Mahal’ provides a completely satisfying climax. All 7 tracks though from this 58 minute-epic are fantastic, and even with the length of the piece, Mothertrucker manage to keep things nice and interesting throughout!

I would really advise anyone remotely interested in anything post, prog, metal, stoner or doom to have a listen!!